Lunch with a Catholic priest, who was an old friend, cost former Ryder Cup captain Paul McGinley plenty when his car was broken into just outside of San Francisco last week.

McGinley was in town to contest the AT&T Pebble Beach National Pro-Am at Pebble Beach but had his preparation seriously interrupted when his golf clubs and some special Ryder Cup memorabilia he had been saving also disappeared out of his car. 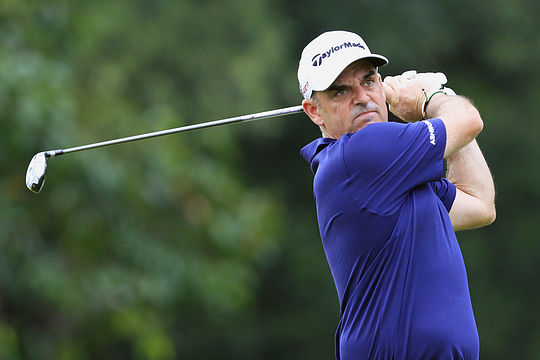 Even his passport went missing, meaning McGinley spent much of the week trying to sort things out rather than concentrating on his golf.

The Irish ace had flown into San Francisco Airport and was heading south before stopping at Ocean Beach for lunch, at the suggestion of his good friend Father Brendan McBride.

While they were lunching though, the back window of his car was smashed and some valuable possessions taken, along with some Ryder Cup items McGinley had set aside for a charity auction.

“All my stuff was taken,” McGinley.

“I was just disappointed…I had only been in the country an hour and a half.

“It can happen in any country, or city in the world.

“I thought it was safe, and it didn’t cross my mind.”

Actually it was Father McBride’s suggestion that the pair stop at the Cliff House Restaurant, at Cliff Top on the Pacific Ocean shoreline, just a short drive south of the famed Golden Gate Bridge.

“It was one o’clock in the afternoon and I just wanted some fresh air, having been on a plane for so long,” said McGinley.

“Fr. McBride, a good friend of mine, and a Catholic priest, met me at the airport, and he had married me and Ali and also christened all our kids, and is a very good friend of the family and also a good golfer.

“We parked the car just outside the Cliff House in a busy street – a lovely part of town.

“So we walked the beach, and came back and the back window was smashed in and most of my stuff taken.

“The problem was I had a SUV and my clubs wouldn’t fit in the trunk, so they were sitting in the back seat.

“And it’s not just the clubs, as they took my range finder, all my notes, my golf notes that I’ve been taking and working on my golf swing and stuff like that. Golf shoes, gloves, all the stuff that you would normally have.”