He signalled he was a star in the making during last year’s Ryder Cup win for Europe over the US in Paris.

Now Danish golfer Thorbjorn Olesen has landed himself in hot water after being arrested on suspicion of sexually assaulting a female passenger while she was asleep during a flight from the US to London. 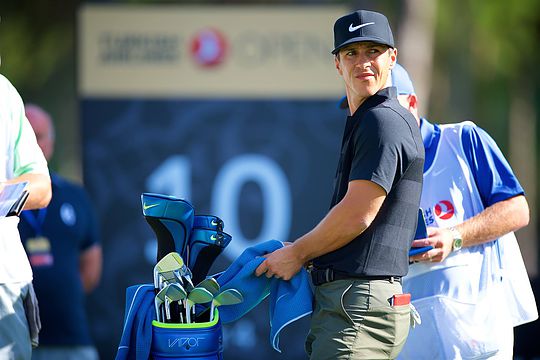 The 29-year-old was aboard a British Airways flight from Memphis to Heathrow when the alleged offence took place.

Olesen was also accused of urinating in the aisle of the aeroplane.

It was later revealed that Olesen may have been involved in an argument with other passengers after becoming verbally abusive, which required fellow golfer and friend Ian Poulter to intervene and attempt to calm the situation.

Poulter, also a Ryder Cup star, apparently then went to sleep and had no idea that Olesen had evidently caused further disruption and was involved in another incident.

Indeed the first Poulter knew there were more problems was when he saw police waiting for Olesen when the plane landed in London.

While he was released pending further investigation, Olesen was subsequently suspended from the European Tour.

It has now been revealed Olesen must appear in court on August 21 to answer charges.

According to the London Sun newspaper, an eye-witness on the flight told them: “He (Olesen) started abusing some of the passengers and crew and then made a pass at one of the female passengers before taking a leak in the aisle.”

“It was shocking behaviour.”

“You would expect it maybe on a budget airline but not in the first-class cabin on BA.”

A British Airways spokesman said: “Our customers and crews deserve to enjoy their flights, and not to suffer any form of abuse.

“This sort of behaviour will not be tolerated, and the appropriate action will always be taken.”