Australian golf’s quiet achiever, Sarah-Jane Smith, believes a win on the LPGA is not that far away.

The diminutive Queenslander has steadily improved her game, with results to match, where she now thinks she can realistically look at breaking through for her first win on the toughest women’s tour. 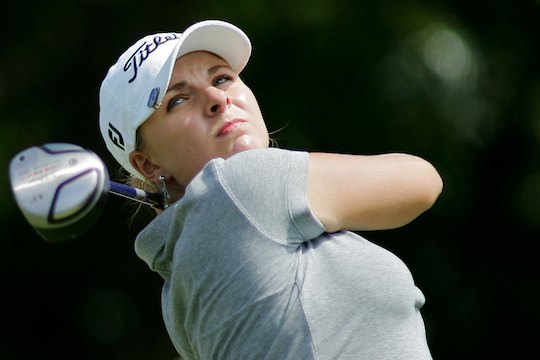 “A few years ago people would say: ‘do you think you can win’ and you would say ‘yeah I think I can,’ but deep down you know you are not really in a place that you could win,” she told The Golfer Monthly.

“Whereas now I feel like I am legitimately starting to get everything in line and I feel like we are getting to the spot now where it is definitely a realistic goal.”

Smith’ game has risen to new heights since winning her card on the LPGA through the Duramed Futures Tour in late 2008.

In season 2011, Smith has made six cuts from eight starts, including two top-10s. She credits her improved game to her coach of two years, Canadian Sean Foley and a chance meeting last year with Dave Stockton.

“Sean is very smart when it comes to the science of golf,” Smith says.

“We worked a lot on my swing when I first went to see him and he has a really good pitching system that has really done wonders for my pitching.”

But Smith says what has taken her game even further was when the legendary Dave Stockton walked up to her on the putting green at a tournament in California last year.

Stockton then generously worked with Smith every day for several hours.

“He didn’t ask for anything and he just helped me out,” she said.

“He changed my putting in that first week but it has made a massive difference.

“Initially I felt like I was cheating on someone by going and seeing Dave but Sean completely understands.

“They both respect what each other does and Dave said he would rather not get involved in the swing and Sean is more than happy with that.”

While Foley and Stockton play an important role in the steady rise of Smith, where she now sits around 60th on the USLPGA money list, the most important man in her life is her husband and long-time caddy Duane.

The 27-year-old glamour admits it is unusual to have her husband as a caddy but believes it has worked in her favour.

“He only wants the best for me and vice versa,” she said.

“It’s maybe not quite as easy as having someone detached who doesn’t really care if you make the putt or not but I think it makes it all that more special if you do have a great week. “

Even if sometimes things do become a little bit tense.

“We have definitely had our moments,” she laughed.

“He is disappointed for me and sometimes I see him putting his head down and I say: ‘what are you putting your head down for, keep your head up,’ only because I am angry with myself.

“But we have worked on that sort of stuff and we are both getting quite good and not doing that.”

If Smith does manage to win on the LPGA tour, one gets the feeling it will be a very special win indeed.

“To have Duane be a part of it will make it so much better,” she said.