Sarah Oh: Going Her Own Way

Sarah Oh has always done things her own way and that is why it is no surprise to learn that the Sydneysider has shunned the two main tours, the LPGA and the European Tour, to forge a career on the Korean circuit.

It has been a steep learning curve for the Korean born but proud Australian, a tour where she didn’t know anyone but at least spoke the language. 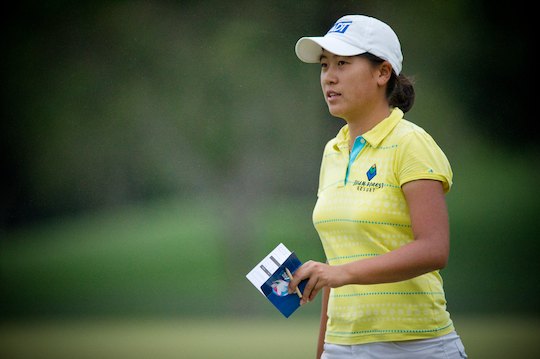 “At first I struggled because I lived all my life in Australia,” she said.

“I didn’t have a lot of friends over there because I arrived in Australia when I was 5 or 6 years of age and I went to school all my life here.”

“I am the only Australian on the tour but it is great now because I have made a lot of friends who help me out, travelling wise.”

“They are very friendly and it is a great tour.”

After battling on the secondary Korean Tour for two years, Oh earned her stripes to the main game the hard way, a gruelling ten qualifying rounds of golf with the final days played in cold and windy weather.

“It was just horrendous,” she said.

“Fortunately I putted really well which helped a lot. I was 12th after the third round and I didn’t play too well the fourth round and I thought I just missed out but luckily I just got in.”

The 24-year-old now has conditional status on what is arguably becoming the toughest circuit in women’s golf, and has just one aim for the season ahead.

“My goal is to keep my card on the Korean Tour, my first year on there, so if I could keep it that would be great,” she said.

“It would be nice to try and and have some good finishes but we’ll see.”

Oh has always had the game of a winner. She went back to back in the Bing Lee Samsung NSW Open in 2009 and 2010 and was also an outstanding junior, winning the Australian Amateur in 2005 as a 17-year-old.

But she admits the past year has been very lean.

“I struggled last year on the secondary tour, even in Australia I didn’t have a good year. I was struggling a lot with my game, a bit of everything,” she said.

“I didn’t lose it is as such. It is just that the previous years everything just came all good together.”

“But recently it has been if this works then my putting won’t work or if my short game works my putting doesn’t work, just those little things.”

Oh has been putting in some solid hours with her coach Paul Latham at Sydney Olympic Park before her Korean season starts next month.

“I feel it is starting to come back a little,” she said. “I can’t say it is 100 per cent but it is getting better – hopefully it will work out.”

Oh says the strength of the Korean Tour has only made her game better. She regularly practices at the Korea Sky 72 Golf Academy with some of the world’s top ten players including current number three, Na Yeon Choi.

“I have a lot friends and great players that I can learn off in Korea which helps,” she said.

For the moment Oh is happy to play the Korean Tour but may head over to Japan in a few years’ time. The USLPGA is also another tour she may target but it is not on her immediate radar.

“At the moment I am really happy with the Korean Tour and I really enjoy it over there,” she said.

“You don’t have to fly everywhere in Korea which is great, you just have to drive from tournament to tournament.”

“I am feeling confident about the year ahead because I am playing a lot better than last year. It is going up, not down so hopefully I will have a good year.”