Adam Scott just laughed when asked what would happen if he and new caddy, Ricci Roberts were to win the FedExCup.

Scott has the renowned Roberts on the bag for the FedExCup Series after Ernie Els, who Roberts has been the long-time caddy, failed to qualify for the ultra-lucrative Play-Off Series. 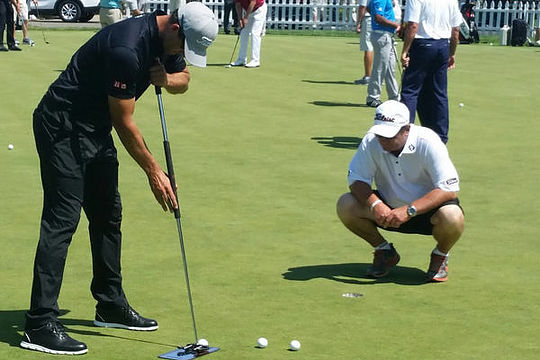 “I was a little opportunistic on the putting green last Sunday at the Wyndham, and I hadn’t had anyone lined up to caddy for me these next few weeks, and it clicked that Ernie is not going to be here, so I asked Ernie if he was alright with the arrangement and he said he was fine, so it’s great that Ricci is on the bag with me,” said Scott.

“Ricci was also keen on the notion and it helps that we have known each other for a very long time, and we’ve always have fun together over the years on Tour and competing in events like the Presidents Cup.”

In fact, Roberts said he’s known Scott since the Queenslander was 16 years of age.

“I’m looking forward to working with Adam as he’s such a great player and here’s hoping we can do well these few weeks,” said Roberts.

Scott tees up in the $8.25m Barclays Championship on the Plainfield Country Club course in Edison, New Jersey lying 94th and will need to at least make the halfway cut to be assured of being among the leading 100 that move onto next week’s Deutsche Bank Championship just south of Boston.

And when Scott was asked the scenario if and the wily Roberts went all the way to victory in Atlanta Scott said laughing: “We’ll all be happy.”