If Australia’s Asian Tour star Scott Hend has a secret weapon to his stellar playing in 2013, it might just be his caddie.

Fellow Aussie professional Tony Carolan agreed to carry Hend’s bag while biding his time until until he could win back his own ticket on the Tour, via Q-School. 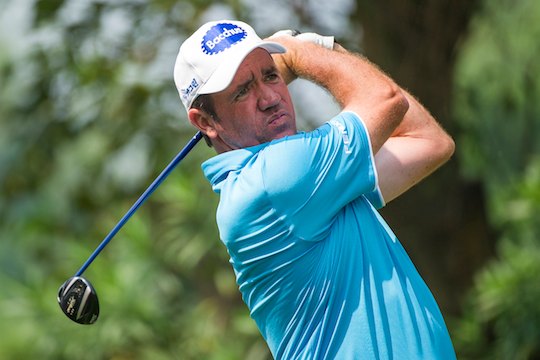 And the pair, who are close friends, have “clicked” with Hend having won three times in Asia this season [twice with Carolan on the bag] and now staring down a chance to return to the even-more-lucrative US PGA Tour.

“It’s great, because Tony and I are such good friends,” Hend said.

“When he was out on the Asian Tour playing, we played a lot of practice rounds together and we also room together a lot.

“I feel pretty honoured for him to actually say yes and come out and caddie for me until he gets his chance to go back to Q School and get his card back.

“And I have no doubt he’ll do that because he’s such a great player himself.”

Hend said the pair actually worked well together on the golf course because they played a different type of game.

“Having the perspective from both sides has sort of helped me to channel my game, the way it’s been going,” said Hend.

“Luckily for me, it’s worked a couple of times this year,” added Hend.

Armed with that great ally, 40-year-old Hend, one of the biggest hitters in world golf, has also shown he’s prepared to put in plenty of good old-fashioned hard work and perseverance to get the most out of his golf game.

“I’m just working hard, physically and mentally on my game,” he said.

“You can’t work on your game and not work on yourself physically and mentally, because they have all got to be pretty much as strong as each other.

“It’s just all the little things through life that you try and do to achieve a goal.”

If his goal is to return to the biggest golf tour in the world, Hend looks to be on the right track.