Greenkeepers at the famed Royal Adelaide golf course did a double-take last week when former US Masters champion Adam Scott strolled into their maintenance shed – just to give them a compliment.

The Adelaide-born Scott had just been out and fired five-under par around the par-72 former Australian Open layout…and the impressive part about that was that Scott was playing with only half a set of golf clubs. 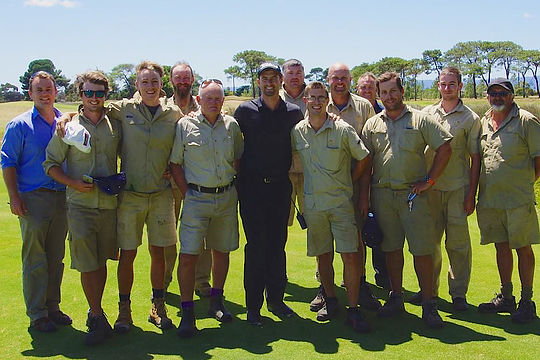 Scott surprised everyone at the club when the Queenslander arrived at the exclusive course for a round of golf with his father, Phil.

In Adelaide to visit friends, the two Scotts decided to head out for a friendly hit on a quiet Friday morning at Royal Adelaide Golf Club.

And they had arrived in South Australia after packing lightly: in an effort to fit two small carry bags in one golf travel cover, the father-son duo arrived with just half a set of golf clubs each.

Obviously that didn’t worry one of the world’s best ball strikers as Scott [junior] went out and fired a five-under-par 67 around the testing layout.

The world No. 3 then posed for some photos with juniors who were practising at the Royal before heading for the greenkeepers’ shed while they were on ‘smoko’ so he could compliment them on the condition of the course.

It’s no wonder Scott is one of the world’s most popular golfers. And there’s no prize for guessing who’ll be their favourite golfer for years to come.