Adam Scott has promised to be a ‘red hot putter’ by the time he arrives at Augusta National in early April.

But firstly Scott will take his putter on to this week’s Valspar Championship after a seemingly effortless transition from his broomstick winning 2013 Masters putter to a conventional length club. 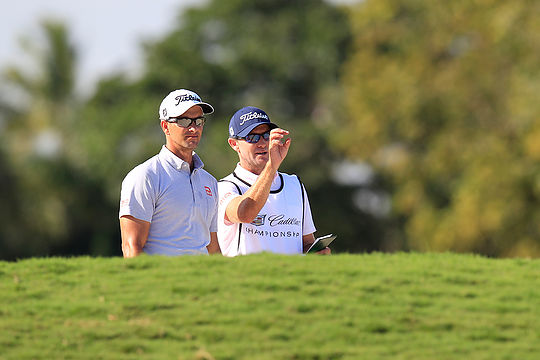 Scott, who was competing in his first event of 2015, posted a final round 71 to share fourth place alongside Sweden’s Henrik Stenson (72) at the WGC – Cadillac Championship.

The duo ended the first big showdown of the new season five strokes adrift of new World No. 6 Dustin Johnson who bounced back to winning form in stunning style in coming from five shots behind on the last day to capture a second straight WGC title, as well as a ninth PGA Tour success, with a closing day 69 for a nine-under par total.

Scott was also delighted to have finished so high up in his opening event of 2015 and like Johnson is returning to competition for the first time as a new father following the birth of daughter, Bo.

“There’s a lot of good stuff. Certainly you can out full of rust and not competitive. There was plenty of good stuff and I think I can really tighten a few things up,” said Scott.

“But I was really happy with the way I took my game out of a break and back into play and certainly made my share of putts this week, which felt good switching back to a shorter putter.”

A check of Scott’s putting stats for the week reveals he had 27 putts on both Thursday and Friday and then 30 putts over each of the two weekend rounds.

And that is enough to instill in Scott the confidence to use the same putter in competition at the Innsbrook Resort course in Tampa Bay later this week.

“Yeah, I’m very happy with what I saw out there as I made plenty of putts,” he said. “The greens were beautiful and it felt like I started the year off on the right foot. Hopefully I can build on this and just get better.”

“So I will take this putter onto Tampa and that’s the plan. I think I putted very well overall and feel very comfortable with where I’m at with it. I’ve got to test it the next couple weeks again, and hopefully it keeps improving, I’ll be a red‐hot putter by the Masters.”