The popularity of the late Jarrod Lyle was never more evident than in last week’s PGA Charity Day at Brisbane’s Keperra Country Club.

Boasting a field including US Tour winners John Senden, Rod Pampling and Cameron Smith, more than $46,000 was raised for the Jarrod Lyle Family Trust Fund. 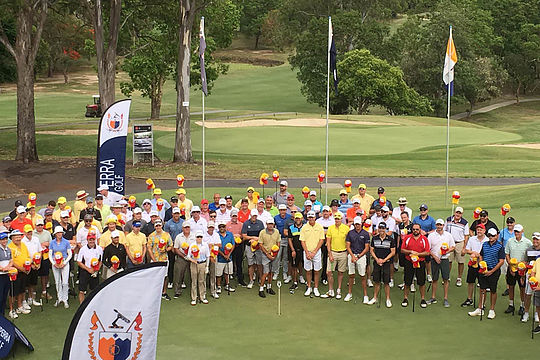 Senden himself hosted the event which also attracted gun professionals like the legendary Peter Senior as well as up and comer Jake McLeod, Steve Jeffress, Adam Blyth, Matt Guyatt, Daniel Nisbet, Anthony Quayle and others.

Certainly Senden gained particular satisfaction that the PGA ‘family’ rallied to the cause.

“It was really pleasing to see how everyone came together from Jordan Spieth and Rickie Fowler, who donated items, to our PGA pros here in Australia giving up their time to help make a difference in the lives of Briony, Lusi and Jemma Lyle,” said Senden.

“The support shown from golf industry suppliers, local golf clubs, each of the governing bodies as well as many golfing enthusiasts who were a part of the day, is a credit to our industry and shows just how close knit the game of golf really is.”

“Keperra Country Golf Club will always be my home. I have many special memories here at the club and for them to show their support to myself, the PGA and the Lyle family is really pleasing and I have to thank them dearly for their commitment.”

“We are so proud that the success over the past two years for this event has seen $85,000 raised for very worthy causes,” he said.

“Having John [Senden] in town this year and seeing the support his fellow professionals were giving him, makes initiatives like this well worthwhile.”

NSW Open winner Jake McLeod stole the show when he was challenged to cut off his ‘man bun’ in return for a $3000 donation.

And when Cameron Smith offered to throw in another $2000 to see it happen, McLeod took the ‘cut’ and $5000 was added to the Trust Fund.