Sergio needs to ‘Do a Sergio’

Sergio Garcia appears to be making a pretty good fist of it in his return to the game after a time in the wilderness in 2010.

His first showing of the year on the PGA Tour was in March, late in comparison to most, but a positive start with a tie for 15th at the Transitions Championship followed by an 8th placing at the Arnold Palmer Invitational at Bay Hill. 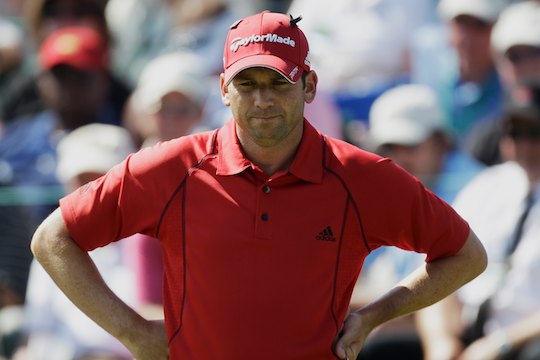 Has Sergio lost his trademark swagger and energy out on the fairways?

At The Masters last month, Sergio shot an impressive three-under par 69 in the first round despite bogeying the last hole and backed it up in the afternoon on day two with a one-under 71.

An early run at the lead on the front nine in round three was harpooned with a double bogey, bogey stretch that sent him into a downward spiral from which he couldn’t recover.

Still, a creditable tie for 35th in what was a great Masters is not the end of the world. You wouldn’t know it however, as a thin, tight smile was about the best expression of satisfaction we saw from Garcia on the coverage.

His entire demeanour and body language these days is more ‘hang dog’ than the bouncy, effervescent Sergio we’ve come to expect over most of his career.

Almost every shot and hole, even after a birdie, is greeted with a sombre reaction, as if any good play is a surprise but only a reprieve from the inevitable.

Any average to poor shot is followed by a prolonged shoulder slump, tapping down depressions in the fairway or spike marks on greens that are not there, as if seeking something or someone to blame.

A few years back, you would expect a bouncing Sergio with an energetic walk and a confident swagger, plus one or two too many pre-shot waggles!

I know it must be difficult to be upbeat when the results aren’t flowing as he’d like but Sergio would do well to revisit a chapter from the book of his earlier career, when he was the flamboyant new kid on the block that nearly ran down Tiger Woods at the ’99 PGA Championship (remember him running up the fairway and leaping to follow the result of that miracle shot from against a tree?) and in a host of other tournament and Ryder Cup wins.

Watching him in the opening events this season and at The Masters and this week at the Wells Fargo Championship (T28), you can see that he struggles to move on quickly from the indifferent shots and the bad breaks.

His challenge appears to be to find a way to brush off the bad shots, accept the good and the bad breaks that are a part of golf and find some energy and positivity in his chipping and putting, for which the pendulum of success or failure in his physical game seems to swing.

We see that same ‘Sergio’ energy these days in Jason Day, Rory Mcllroy and Ricky Fowler.

Sergio needs to get back to ‘Doing a Sergio’.