Shark says Tiger has time on his side but not much

(Naples, Florida:) As with Tiger Woods, double-major winning Greg Norman spent last week returning from injury to play competition golf and just a 20-minutes drive from where Woods returned to formal competition after a 10-month back injury and surgery.

Norman was competing in the Richard Branson hosted Manuka Dr. Necker Open, an annual pro-celebrity event normally played on Branson’s Necker Island but due to the devastation caused by Hurricane Irma the two-day event was moved to the Baha Mar Royal Blue course on the Bahamas. 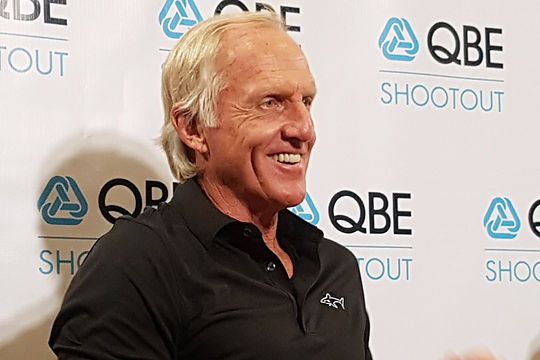 Of course, the Australian-born Norman had been aware of Woods’ opening rounds of 69 and 68 before returning to the US mainland last Saturday morning to host a weekend Christmas bash for his Great White Shark Enterprises Florida-based staff.

Now also as host this week of the US$3.3m QBE Shootout, formerly known as the Shark Shootout, Norman spoke of his delight that Woods is now seemingly injury-free and very competitive as evident by his share on 9th place on the Albany course.

And with bookmakers reacting to Woods competitive return by installing the soon-to-be 42-year old as a 20/1 favourite to win the Masters, Norman was asked about his own assessment of Woods’ potential return to full competition early in 2018.

“For sure. Look, he’s a name, he’s moved the needle for quite a long time in the game of golf,” said Norman.

“Everybody was wondering, you know, the speculation of him saying, “I may never play golf again,” and then all of a sudden he says he’s hitting the ball 330 yards. Big difference from there to there, right?”

“But you just hope it continues on for him because a lot of the stuff he’s done has been self-inflicted, but a lot of the stuff that he’s going through now is more, you know, the wear and tear of the body hitting a lot of golf balls, being a power player, your body breaks down and that’s going to continue to be there because he just got ready to play one event, which was an 18‑man field.”

“When you start getting up in a 156‑man field and the golf courses are a little bit more difficult than Albany, a lot more rough out there and he’s got to manage his expectations. Instead of trying to power a 7‑iron out of the rough 220 yards, your body may ‑‑ you do that a few times, you never know what’s going to happen after that.”

“So I hope he manages his expectations more than everybody else’s expectations being like he’s going to come back and be Tiger of past. I think he still has a little bit of time on his side, but not a whole lot.”

The Irish duo of Shane Lowry and Graeme McDowell finds themselves the only non-US pairing in Friday’s start to the QBE Shootout being held on the Tiburon course in Naples, Florida.