Who says golf is not a family sport?

Certainly Indian professional Shubhankar Sharma would take you to task after this week being named the Asian Tour Order of Merit winner. 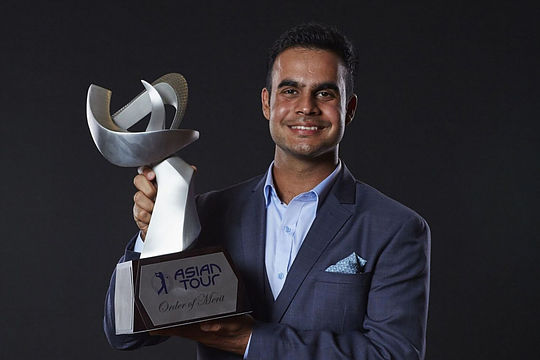 Only 22, a delighted Sharma had to wait until the conclusion of last week’s South African Open to claim the title.

And the impressive young pro said he could not have succeeded without the backing of a loving and supportive family.

Sharma’s year was certainly one to remember as it saw him play in all four major championships as well as all the WGC events and also win the Arjuna Award on top of his OOM success.

“I’ve always dreamed of winning the Order of Merit since I turned professional in 2013,” he said.

“I used to watch the Asian Tour on TV, seeing the likes of Jyoti Randhawa, Arjun Atwal, Jeev Milkha Singh and Anirban Lahiri, who have all won the merit title.

“I am honoured to now be part of that illustrious list.”

Sharma’s win at the Maybank Championship in February got the ball rolling for him and he naturally rated that as the highlight of his year.

“That started things off for me,” he said.

Sharma explained that his family had given him unconditional support on and off the golf course; accompanying him on his Major debut at the Masters and keeping him grounded as well as lifting him spiritually.

“I’m really happy that the whole family enjoyed themselves at Augusta National,” he said.

“My sister, whom I share a very close bond with, wrote a piece to Associated Press documenting my journey. I’m very glad she’s recognised for her talent.”

“My family has always supported me and you always need a team; you can’t do it alone.

“They’ve been there ever since I started golf. It has meant a great deal to them; it was good news after good news.”

Sharma is now setting his sights on accomplishing even greater goals in 2019.

“Playing in all four majors again will be my number one goal,” he said.

“I am also aiming to play well in Europe and finishing in the Race to Dubai in a strong position.”