One could never say missing a cut would prove to be a fruitful exercise in professional golf, especially at a Qualifying School when a job for the next year is at stake.

Gold Coast professional Peter Shaw had this very experience at the Asian Tour School recently but in his case, it has played a part in sparking a revival of form and fortune, if his recent run of success has been anything to go by. 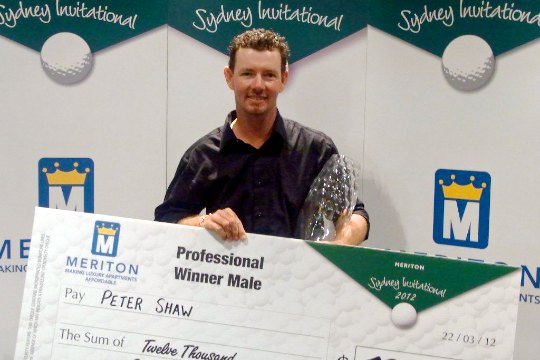 After posting a 2nd round 74 at Springfield Royal Country Club in Hua Hin, Thailand earlier this year, Shaw would endure an anxious wait before he would learn that his hopes of a card for 2012 were dashed – missing the 36 hole cut by one shot.

Rather than being down in the dumps, Shaw returned home to his wife and young son and made a decision to adopt a fresh approach to his golf.

He still maintains the passion for the game and will play as many pro-am events as he can and try to focus on making the big end of year tournaments in Australia.

However, after Thailand, Shaw made the decision to effectively retire from the grind of touring life to focus on his teaching business – ‘The Range@Robina’ – at Robina Woods Golf Club and spend more time at home with his family.

35-year-old Shaw notes that while this was more of a forced retirement, with the pressure to perform lifted, his approach to his golf since then has been far more relaxed and it would be an understatement to say that his game has certainly flourished as a result.

In fact, we should all retire if Shaw’s results in the past two months are anything to look forward to!

Having taken possession of the new Cleveland Precision Forged 588 wedges only two days earlier, Shaw ‘stiffs’ almost every wedge he plays to shoot a 5 under par 67 and share the Pro-Am victory with Christopher Wood and Jun Seok Lee.

Shaw continues his hot streak and shoots a final round 65, the low score of the day, to finish at 9 under par in a tie for 10th.

“I wasn’t too far behind (individual winner) Nick Cullen there and he’s just won over on One Asia (the Indonesia Open). There were a lot of One Asia players in the field which gave me confidence, matching it with the guys who are exempt in Australia and over there.”

More importantly however, Shaw and amateur partner Chris Gentle shot 5 under over their final 4 holes to find themselves in a playoff for the Team 4 Ball title.

They went on to defeat Paul Williamson and his partner Tony Clark on the first playoff hole.

“I didn’t even have to do anything, Chris won the hole on his own!” Shaw laughed.

Shaw would take his form to Sydney, to a tournament he won in 2009 and where his comfort levels are high.

Making the surrounds even more conducive to continuing his good play was the company of some mates he has played with in this event year after year, including former NRL back rower for the Penrith Panthers, Joe Vitanza.

“I’m pretty familiar with all the tracks from my trainee days and playing with these guys is really enjoyable every year. I always seem to play well in Pro-Ams because I go out to enjoy them and have some fun.”

The Meriton Sydney Invitational was being staged for the 9th occasion and proceeds from the event are donated annually to the Westmead Children’s Hospital.

Tournament Director John Small handed over a cheque for $50,000 to the hospital at the gala dinner following the tournament, taking the monies raised from the tournament’s inception to over $450,000.

Adopting the same carefree approach, Shaw was quick to open up a handsome lead against a field that included players of the calibre of Craig Parry, Bradley Hughes, Peter O’Malley, Paul Gow and Adam Bland.

Shaw took a five shot lead into the final round at The Lakes and a bogey free 3 under par 69 would see him clear out to a 7 shot victory over Parry and Michael Moore – and a third lucrative pay day in just 3 starts.

“I hit the first 14 greens in a row (in the final round) and only missed one fairway. It was the kind of round you need when you’re in front because you’re not going to be in danger of letting the other guys back in.”

Shaw picked up a cheque for $12,600, the same amount won by the winner of the Women’s division, Kristie Smith.

Shaw does not sound overly shocked by his meteoric form but wants to enjoy the ride while it lasts, knowing that it won’t last forever.

“My game plan has been to be aggressive because I’ve got limited starts, so you have to make the most of it.”

While Shaw is now enjoying being at home, looking after the members at Robina Woods and his growing band of loyal students who work in his popular Short Game Schools at The Range, he has an eye to playing some of the rich Pro-Ams in the mining towns in central Queensland in a few months time.

He also spoke about playing the Australian Club Pro Championships at Sandhurst, which is a course he enjoys and where some good prize money and status towards further exemptions at the end of the year are on offer.

“The attitude now is that when I do get to play an event, try as hard as I can but if I don’t play well, get over it and go to the next one. It all boils down to having less pressure and playing with a bit of a ‘who cares?’ attitude.”

Having experienced this golden run right after the disappointment of Thailand, Shaw is acutely aware of how quickly things can turn and how careers can be drastically altered.

Nick Cullen’s recent victory in Indonesia would be a topical example of a hard worker making the most of his opportunities.

If this kind of form can be maintained throughout 2012, Shaw’s retirement plans may well need a rethink.