Smith gives back to local golf with US invites

The popular Queenslander has introduced the Cameron Smith Golf Scholarship and is taking two young Queenslanders to his Florida base to show them what their future may hold if they play their cards correctly. 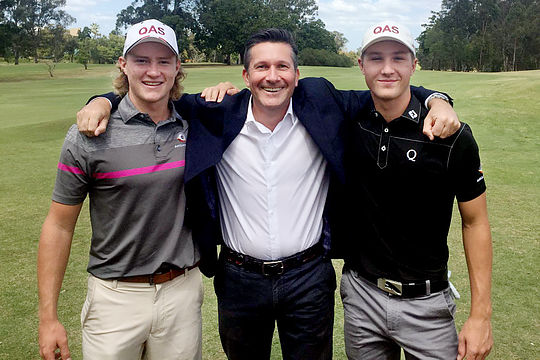 They will live with the world’s No. 32 and practise with him as he attempts to show them the correct paths to a career in golf.

There’s even talk of maybe getting future scholarship winners into an event while they are over there.

These two hot young golf prospects rightfully feel like they have hit the jackpot.

“This is going to be so good,” said Morgan.

“We get to live with him, train with him, watch him in action.”

“From what we’ve heard Cameron is a pretty chilled type of guy…but he’s letting us into his private life all the way over in the US and that speaks volumes for what sort of guy he is.”

Smith has had another great year on the US Tour and having already banked more than $7m in his career is keen to show his lifestyle to a couple of young men dreaming about following in his footsteps.

“It should be motivating enough to see what toys he’s got and what practice facilities etc that he uses,” said Smith’s Queensland-based coach Grant Field.

“It should give these young men the perfect introduction to the professional game.”

“Hopefully he’ll create a trend for the young guys and the next batch coming through as well.”

Dobbelaar agreed: “We haven’t played with Cam yet but hopefully we’ll get the chance when we get over there,” he said.

“We might be able to win some of his cash off him.”