Most people would love to earn over $2 million but for American Stacy Lewis it is embarrassing.

Last year’s Kraft Nabisco Major winner can’t believe she gets paid the amount of money she does playing a game she loves. 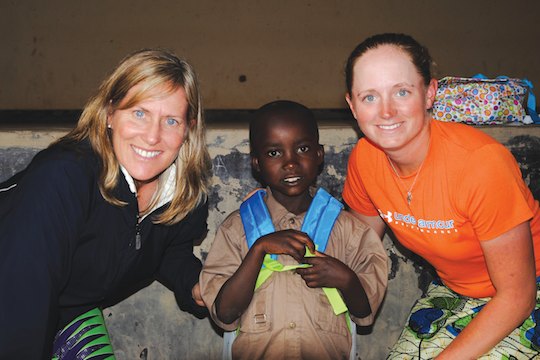 “Something I struggle with is that with golf as a professional you make money which I don’t really care about,” she said.

“As long as I have enough money to get by I really don’t care.”

It took a trip to Africa in late 2010 to make the easy-going 27-year-old realise there was more to golf than chasing around a little white ball. All of a sudden a two-over round really didn’t matter.

“It changed the way I looked at golf and what I do,” she said.

“I struggled with if I am going to play for all this what do I do? So I figured out when I was in Africa, I realised the better I play the more I can help their people so it just gave me this new, better sense of doing it and a purpose to be out there.”

So moved by the people’s plight, Lewis decided to donate some of her earnings to the Betsy King Golf Fore Africa fund. An organisation that assists those living with HIV/AIDS.

A few months later she won her first major, the Kraft Nabisco, after just three years on the tour. Her new sense of purpose helped her record her best season on tour with twelve top ten finishes. It was enough to place her fourth on the USLPGA money earners list and her give her a world ranking of nine.

Lewis is a person who plays with her heart and a tonne of courage.

At the age off 11 she was diagnosed with scoliosis and underwent surgery at the age of 18. Her lumbar spine was fused and a single rod and five screws were inserted into her back. Perhaps overcoming adversity is why she relates so well with those struggling in Africa.

But Lewis is able to put in all in perspective. Her back is the way it is and she approaches her game her way.

“When I travel on a Monday, I take Monday off and let my back rest and I find that is the best thing I can do rather than kill myself every day,” she said.

“It is hard because as a golfer you think you should be out there practicing and playing all the time. There’s 150 players in the field so there is bound to be somebody out there practising.”

Lewis is looking forward to more great results this year but will not fall into the trap of comparing season 2011 with season 2012.

“I think every year is going to be different to say if I don’t win a major this year I can still be successful so I am just going to go out every week and try and do my best and try and get in contention,” she said.

“That is my goal every week is to give myself a chance on Sunday and if you can shoot a good round great if not you are still right there.”

And while she was pleased with her efforts the fact that she was able to contribute more funds to some of the world’s most needy gave Lewis greater satisfaction.

“When you see a 4-year-old boy walking around with a bucket of water on his head that just put things in perspective.”