Melbourne trainee professional Martin Steel has recently returned from a brief stint in the USA, intent on forging a coaching career in the US Collegiate system.

Steel, a final year trainee professional at Metropolitan Golf Club, spent most of June in the US and met with leading head coaches at the NCAA Division 1 Men’s Golf Championships in Oklahoma. 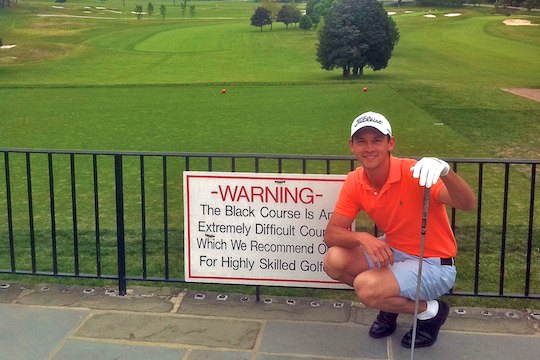 MARTIN STEEL: A young man on a mission after his recent trip to the US

With the top-30 US university golf programs competing, Steel spoke to almost every coach about future job prospects.

The opportunity confirmed his desire to pursue an assistant coaching role for the 2012/2013 NCAA season.

“It would give me the chance to work with elite players.”

The 23-year-old was impressed by the NCAA Championships, which was held at Karsten Creek Golf Club – home to the Oklahoma State University golf team.

“The tournament was run like a tour event and the course was playing extremely long and tough,” he said.

“The Golf course was immaculate and one of the best I’ve seen,” he said.

Steel watched current US Amateur champion Peter Uihlein and world number one amateur, Patrick Cantlay, playing in the same group and said the general standard of US amateur golf was exceptional.

“For a player to be on a division one golf team, (his) standard could be compared to the top 15 amateurs in Australia,” Steel said.

He also spent a day with The University of California Berkeley’s head coach, Steve Desimone.

“He has been the head coach of men’s golf at Berkeley for 32 years and said it’s a very rewarding job. He gave me a lot of useful information and a great insight into college coaching,” Steel said.

“I also visited UCLA in Los Angeles to have a look at their facilities which were quite impressive.”

The NCAA, which governs US collegiate sport, only allows coaches to spend a maximum of 20 hours a week with players to avoid burning them out and Steel said the daily Collegiate structures were extremely professional.

“Days consist of early morning gym sessions, then players will attend class for 4-5 hours and then attend practice from lunchtime onwards. Most players will be playing everyday,” he said.

Golf Australia’s High Performance Director, Brad James, has also encouraged Steel to take up opportunities in the US.

“Brad coached the University of Minnesota to the NCAA Division 1 championship in 2002,” Steel said.

“He said the job was fantastic and very rewarding.”

“I also have a few friends working in the USA and they love it so it’s definitely something I’ve been interested in for some time.”

Steel plans to teach at The Metropolitan Golf Club for the first half of 2012, before making the move to the US in July 2012.