Australian golfing superstar Jan Stephenson has fulfilled a lifelong dream this week, being inducted into the World Golf Hall of Fame at a ceremony in Carmel-By-The-Sea, California.

For Stephenson the honour was overwhelming, having twice been rejected the 67-year old had felt that her dream of becoming a member of the World Golf Hall of Fame would probably remain just that. 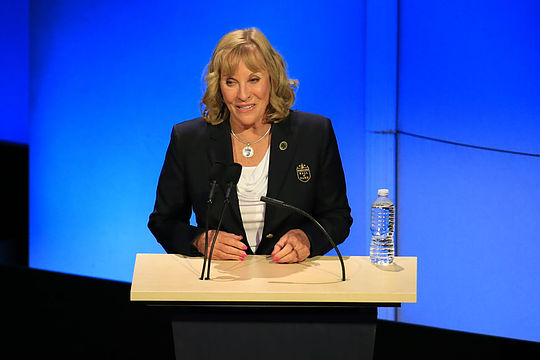 However, a telephone call from her colleague and good friend Nancy Lopez back in October last year changed all that.

Lopez had been the one to deliver the bad news the past two years that Stephenson had not been selected to the Hall and when Stephenson saw Lopez’s number come up on her phone she braced herself once again for more bad news.

However, this time the news was not bad, and an emotional Lopez finally blurted out the good news that Stephenson had waited what had seemed like a lifetime to hear, this time she had been voted in.

An emotional Stephenson took to the stage in Carmel and paid tribute to those who had an impact on both her career and her life.

“As I look back on my career, more than the wins and the fame, what stands out most to me is the remarkable women I’ve had the opportunity to compete with, get to know and call my friends. I consider myself lucky to have played in some of the most amazing times.”

“I even got to witness the birth of career women’s golf and got to play with fellow Aussie and friend Karrie Webb in her very first professional event in Australia.”

“To be now counted amongst the stars as a World Golf Hall of Famer is not only an honour, but it’s so humbling.”

“I’m really excited for Jan to finally be recognised for her outstanding career and her contributions to golf in being inducted into the WGHOF,” said Webb.

“As an Australian woman, Jan was really the trailblazer for all Aussie girls to aspire to one day compete on the LPGA tour in the US. With her success on and off the course creating her notoriety, it inspired the generations behind her to believe that they too could be successful playing on the LPGA.

“I am glad that I could be here with Jan tonight to celebrate her induction with her.”

There is absolutely no doubt that Stephenson, 67, had the golf resumé to warrant her selection — 16 LPGA Tour victories, plus wins on the Ladies European Tour, LPGA of Japan and Asian Tour as well as three LPGA major championships: the 1981 du Maurier Classic (then a major), 1982 Women’s PGA, and 1983 U.S. Women’s Open. She also was the 1974 LPGA Tour Rookie of the Year.

Stephenson thought an induction into the World Golf Hall of Fame would never come her way after being passed over so many times, but there she was at Pebble Beach today with fellow inductees Retief Goosen, Billy Payne and Dennis Walters finally receiving the accolades and the recognition she deserves.