Matt Stieger has collected the Rookie of the Year award for 2012 following the PGA’s NSW/ACT Division Graduation and Awards at Manly Golf Club last Thursday. 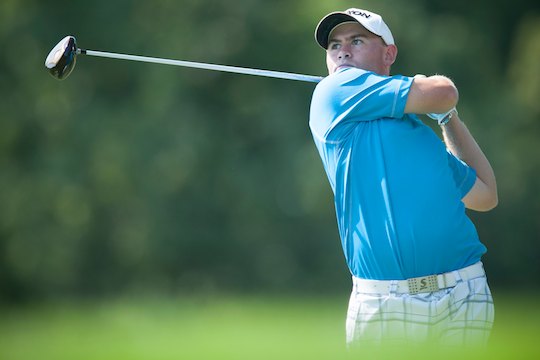 When advised of his award whilst competing last week at the New Zealand PGA Championship Stieger said, “Mate, are you serious? That’s awesome!”

Stieger, the 2011 Australian Amateur champion, was fortunate last summer to gain entry through invitations by the PGA of Australia to a number of professional events on the Australasian Tour with starts in the Western Australian PGA and Western Australian Open, Australian Masters, the New Zealand Open and in the process collected the NSW PGA Championship title at Mount Broughton.

The win at the NSW PGA Championship came after only six starts as a professional and gave Stieger a start at the Australian Open the following week which at the time had not been granted. It also gave the 21-year-old a two year exemption on the PGA Tour of Australasia and OneAsia Tour.

With playing privileges secured on the 2013 Asian Tour secured in January through Q-School qualifying Stieger is now positioned well for his formative years as a professional.

Stieger attributes a number of factors to his recent fine run of form, but is quick to point out the considerable work he’s done with his coach John Serhan at his St Michael’s base in Sydney.

“John and all the guys at St Mick’s have been a tremendous help,” says Stieger.

“I would not be where I am today without the support of my team. I owe a lot to all of them.

The boy from Narrabri, a small bush town in north west New South Wales, is not a quitter.

Stieger is a passionate player when the glove is on, which in the past has ruffled the feathers of Australian amateur officialdom.

Despite these known earlier brush ups with the amateur authority, Stieger posses a never say die attitude which will serve him well now he’s in the professional ranks.

With his amateur days behind Stieger is free to apply his own touch towards playing, and his has already quickly established himself with a Tour to play.

“Both my Mum and Dad and my coach John Serhan have been there for me in the good times and bad.”

“Now it is onwards and upwards and it’s great to be recognised by the PGA of Australia in this regard. It’s been a great start to my professional career and I’m looking forward to the challenge.”