After having scaled the heights of OneAsia, Australia’s Andre Stolz has another mountain to climb this week as he seeks to regain his card on the PGA Tour.

Stolz was crowned OneAsia’s number one after finishing equal 19th in the season-ending Australian PGA Championship presented by Coca-Cola. 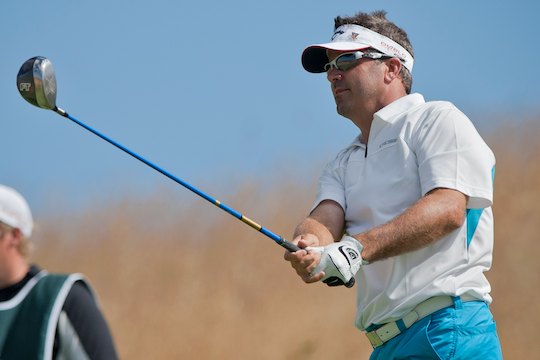 World number 23 Kim Kyung-tae of Korea could have pipped Stolz at the post with victory in Coolum but the third round leader faltered on the final day with a 76 and ended the tournament in joint sixth place, three strokes adrift of winner Greg Chalmers of Australia.

Stolz earned US$464,811 in nine events, including victories in the Indonesia PGA Championship and Thailand Open, with Kim in second place after banking US$327,178.

The veteran won on the PGA Tour before a wrist injury in 2005 forced him to give up the game for nearly three years and he is looking to resurrect his career in the United States after a magnificent season on OneAsia.

After making a quick dash back to America following the Australian PGA Championship, Stolz is competing in the six-round PGA Tour final qualifying at La Quinta, California.

Korea’s Kim Bi-o, winner of the Nanshan China Masters on OneAsia in June, will also tee it up at Q-School after a learning year on the PGA Tour in 2011.

Chalmers joined Stolz as a two-time champion on OneAsia this season adding the Australian PGA Championship to the Emirates Australian Open he won two weeks earlier.

Among the other OneAsia winners during the burgeoning Tour’s third season were Kim Kyung-tae, who won the GS Caltex Maekyung Open, big-hitting Australian Kurt Barnes, victorious at the SK Telecom Open and Volvo China Open champion Nicolas Colsaerts of Belgium.

Thai veteran Thaworn Wiratchant, a multiple winner on the Asian Tour, added a OneAsia title to his impressive collection with victory in the Indonesia Open presented by Enjoy Jakarta while American young gun Rickie Fowler captured his first professional title at the Kolon Korea Open.

There were 11 tournaments on the 2011 schedule with prize money of more than US$14 million but the Charity High1 Resort Open in July was cancelled because of bad weather.

Korean prospect Han Chang-won was one of the finds of the season, the 20-year-old finishing seventh in the Order of Merit with winnings of US$135,078.

Han, the 2009 Asian Amateur champion, led the way at OneAsia Q-School and took full advantage of being awarded spots in every tournament by making the cut in nine out of 10 events.

A sixth place finish in the SK Telecom Open in May followed by fifth spot at the Indonesia Open underlined his potential and he seems destined to follow in the footsteps of Korean greats Y.E. Yang, a two-time OneAsia winner, and K. J. Choi.

A fifth place finish in the Nanshan China Masters helped the former security guard to 40th spot on the Order of Merit, two places higher than iconic countryman Liang Wenchong, who was OneAsia’s number one in 2010.

The 24-year-old Zhang announced his arrival on the international scene by finishing as top Asian in 13th spot at the WGC-HSBC Champions in Shanghai and then teamed up with Liang to claim 18th place in the Omega World Cup.

The new season on OneAsia starts with Qualifying Schools in Asia and Australia over the next six weeks.

Places on OneAsia in 2012 will be highly sought after as the schedule, which will be announced soon, will boast at least 12 tournaments offering an overall purse of US$15 million.