Strength and Power The Name Of The Game

So you think golf isn’t an athletic sport? Think again. Over the last 10-15 years the sport has been transformed thanks largely to a man named Tiger Woods.

Guys like Jason Day and Rory McIlroy are leading the way with regards to physical training and we have some young Australian golfers who are continuing the trend. 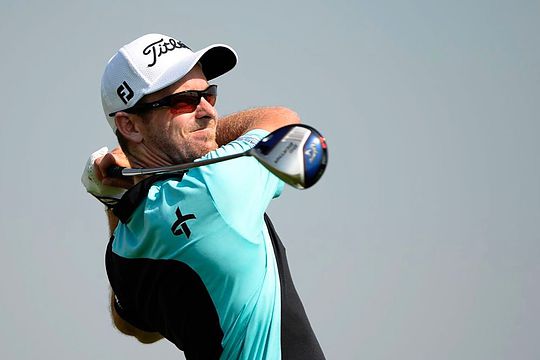 Gone are the days of only simple light stretching in the weight room and maybe turning the legs over on the stationary bike.

You only need to be around the gym at a golf tournament on any given day, to see what’s really happening. Seriously heavy weights being thrown around the gym floor, with players working on increasing strength, power production and aerobic endurance.

We have a group of young professionals in Australia who are leading this charge. James Gibellini and Kalem Richardson in particular take a huge amount of pride in their physical attributes.

James has transformed his body shape over the last year and added around 15-20 metres off the tee. Kalem has increased his aerobic capabilities, however he credits his increased length off the tee and through his bag to his strength and power work in the gym.

Both guys have shown a progressive improvement in their professional results over the last two years. Working with Exercise Professionals, according to both players, has really played a huge role in their improved performance.

Professional golf requires that you be aerobically fit to walk around the 40-50 kilometres of golf course a week. It also requires strength and power to execute each individual shot.

The golf swing takes just over 1 second to be completed, calling on a completely different energy system for movement than your dominant energy system required to cover the majority of the 40-50 kilometres of the golf course.

By having your body in peak physical condition you are giving your brain the best opportunity to solve the problems required to navigate your way around the course. Golf is simply the navigation of a ball around a layout, the person who manages to do this in the least amount of strokes comes out on top.

The game has become such a power-based sport now. Get the ball as far down as possible and use your short game skills to finish the job.

According to Gibellini, “I think I have definitely gained an edge on competitors where the courses are a lot longer. I have picked up 12-15m of carry with my driver, which has meant I have been able to take a more aggressive attitude onto the course. I’m coming in with so much less club with my approach shots and my coach and I know, the closer I am the more accurate I become.”

“My coach believes in weight training for golf, and the extra strength I have gained really suits his beliefs of the golf swing and the direction I want to head in. You only need to look at the driving stats to see how important length off the tee has become. “

Sure you’ll have people suggest that it’s not so important to be in the gym, but if the best in the world are doing it then surely it’s fairly important to success. Golf relies largely on your cognitive ability.

Give yourself the best chance to have your brain working at its peak arousal to performance levels and you’ll be in the best place mentally, to execute your skills on any given day. Don’t dismiss the fact that if you feel physically strong you’ll feel good mentally.

Being strong, powerful and aerobically fit are some of these boxes and you’ll be in a better position to execute your skills, to your highest potential.

Richardson has now become a regular name on the Asian Tour and is playing several European Tour events thanks to his Asian Tour ranking. His improved results over the past three to four years have given him the opportunity to progress his career onto the European Tour full time. Like James, he too credits his physical attributes as a part of his increased success.

“I definitely think, improving my physical capabilities for not only more strength and power, but also longevity?? have contributed to my increased confidence levels. The way the courses are set up now days, really demands extra length through the bag.

“I’ve always thought with my lack in height and levers, I need to make up by building strength and power in my body. Richardson also mentioned how his physical capabilities contributed to his rise in confidence.”

“I like turning up to an event knowing I have prepared myself physically better than most. I feel I have an edge especially in the latter stages of the tournament. As so many professional sportsmen and women have mentioned prior to Richardson, “confidence is everything when looking for that extra edge over your competitors”.

True, your aerobic endurance levels don’t depict your ability to hit good shots individually and golf isn’t a timed race as to who can get to their ball first. What is not widely talked about or known, is that a lack of endurance, whether that be due to a lack of fitness or poor nutrition, can affect your cognitive ability and in turn lead to poor decision making and poor execution of shots.

The brain is essentially like a muscle, it requires an energy source, predominantly that source is glucose. To maximise your decision making skills, it is extremely important to maintain a certain level of aerobic fitness in order for your muscles to not deplete your glycogen stores while walking the golf course.

Give yourself the best chance to make the best decisions by being aerobically durable, fuelled and hydrated. Save your energy for the power production of the golf shot and be at the same arousal levels at the end of your round as you were at the start. An important factor in the quality of decision making is your arousal level.

With increased body awareness and improved physical appearance, these boys have been able to open a few extra doors with regards to brand ambassador roles.

In times gone by when golfers weren’t seen as athletes, brands such as Nike, Gatorade and Under Armour may have looked for more athletic ambassadors. You need only to see who they have on their books now to realise that the sport of golf has undergone a huge change over the last 15-20 years.

It’s an exciting time for both of these young professionals and I’m sure they are well on the way to having very long and successful careers.