Two-time Major winner in a previous century, John Daly, enters another year without any status, pleading for starts around the world.

It’s been seven years since his last win of any kind and a full 16 years since dousing Constantino Rocca’s fire in a playoff for his last Major victory at St Andrews.

Surely 2011 is the ‘mercy rule’ year – where he and we are put out of our misery if he doesn’t perform? 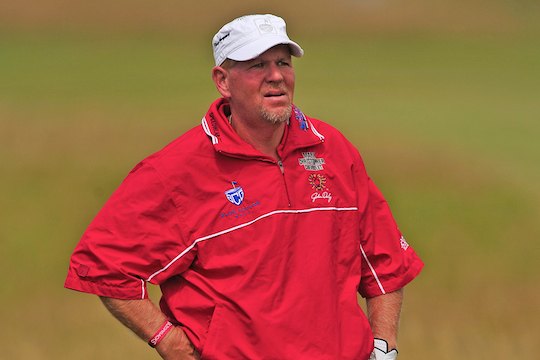 How long can he and we keep this perennial waiting game going, waiting for his game to come around, waiting for evidence to start believing in his ‘I’m striking it well but just can’t get the putter going’ proclamations as he secures his latest cut or T70th finish?

Tournament hosts around the world have kept doling out the invites and appearance fees, allowing him to bob up on the PGA Tour, in Europe, Asia and Australia where he’s a curiosity to fans with his surgically enhanced svelte physique these days and strikingly garish clothes!

Just don’t plan on taking the kids down to the tournament on the weekend to see him though, odds are he’ll be at 30,000 feet by lunchtime Sunday or selling t-shirts in the carpark.

Actually, in 20 starts on the PGA Tour last year, only two of which he had direct entry to as a former winner, Daly actually had a high strike rate for cuts made.

He made the weekend on 14 occasions with a best finish a T24 at Puerto Rico in the event held opposite the World Golf Championship.

He only finished better than 60th on one other occasion however and languished at 193rd on the money list, a spot ahead of 60-year-old Tom Watson who played three events on the main tour.

In a handful of European Tour appearances, he fared little better and in Australia at the end of the year, for the third year running, he missed the cut in his two showings.

His churlish display in shooting 83 in the second round of the Australian PGA frustrated many more involved with the event than it probably did him.

Surely for his own sake, if he can’t convert some of these gift horses in the mouth from tournament directors into performances this year, and earn the right on merit to play on the biggest tour in the world, the tap needs to be turned off and he needs to step down and concentrate on his golf elsewhere.

He’s still a good six years from turning 50 and the prospect of more years of this until he gets a walk up start on the Champions Tour is surely an untenable proposition.

Other multiple Tour winners and even major champions have not been afforded the same gratuities as their exemptions expired and this is undeniably because they don’t provide such good copy as Daly, or drag people through the gate in the hope of being there to witness the next meltdown.

The then eight-time tour winner and serial hard worker, Stuart Appleby, faced the prospect of a year of writing to sponsors for invites until his diligence paid off last year with a return to the winner’s circle and full exemption. I wonder where he would have sat in the pecking order for sponsors’ invites compared to Daly?

Current World No.1 Lee Westwood was in golfing oblivion not long ago but through dedication and hard work, has returned better than ever.

The golfing world will cheer loudly if he can salute the judge and claim his first Major championship in 2011. Ernie Els’ return last year to the lofty heights we’ve come to expect from him is a similar story, although he didn’t fall nearly as far.

Is Daly working as hard as Westwood, Appleby and Els did to get back, on both the physical and mental aspects of the game? My guess is he is not which is a great shame to many if true.

We’d all like to see more of the meteoric flashes of brilliance he’s shown too infrequently since his explosion on to the scene in 1991.

His is a story of underachievement in the extreme. For someone as naturally gifted and talented and having won two Majors, he had only made the top 10 on the PGA Tour on 32 occasions prior to this season out of 448 starts!

That sort of conversion rate would have signalled the career end for mere mortals but I’m pulling for him to get back.

Golf wants Daly back playing as he once did, the biggest headline in golf bar Tiger, even if it is for fleeting occasions each year.

I’m also pulling for golf’s sake, but an inglorious end should be nigh if he doesn’t.