Surf’s up for rookie LET golfers

Life on tour is not all fairways, hotels and airports, just ask pros Stacey Keating and Danielle Montgomery.

During the recent ISPS Handa Portugal Ladies Open, the Ladies European Tour rookies took time out from the golf course to try their hand at surfing. 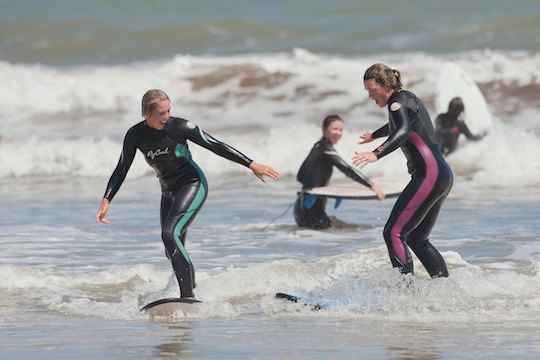 Courtesy of Peniche Surf Camp the duo were given some tips from 2008 Portugese National Champion Filipa Prudencio at Baleal (Norte-Lagide) in Peniche, located 30 minutes away from the golf tournament at CampoReal Resort and Spa.

Both Aussies showed their native spirit and had few problems standing upright, leaving Prudencio rather impressed.

“I am very lucky because they are great students. They have strong bodies and they are very good rookies,” she said.

Both girls enjoyed the break from the tour grind.

For Keating in particular, life as a professional is very new. Keating changed from the amateur ranks late last year after finishing fourth at the Ladies European Tour qualifying school held in Spain.

There is no doubt Keating has what it takes, winning the Australian Amateur last year and the Canadian Amateur in 2008 and she knows her first year out with the big girls is all about learning and adjustment to her new career.

In six Ladies European Tour events, the 25-year-old has made the cut twice, with a best finish of 55th place at the Unicredit Ladies German Open in May.

Montgomery, who grew up in Perth yet plays under the English flag, has enjoyed a slightly better start than Keating and has cashed four cheques from six starts in the current season.

The 26-year-old was born in England but moved to Fremantle as a young girl and learnt her craft in Western Australia.

She joined the Australian Ladies Professional Golf Association in 2007 and is showing her experience, currently placed 14th on the LET rookie of the year Order of Merit.

“We went back and forth about 12 times and you just had to keep going, keep falling off, but we stood up in the end, which was great, “she said.

Keating, who lives in Cressy, near Melbourne, said the experience at Peniche was a welcome break from the practice range.

“It was great fun. It took us a while to get going, I think, but it was great,” she said.

When asked whether golf or surfing was a tougher sport, both Danielle and Stacey felt that surfing was more difficult.

“I think we are going to give Filipa a golf lesson next year. It’s really good to practice here, so we are lucky.”

Stacey added: “Next year we will do a trade.”