Suspended Nisbet declares he’ll be back

Suspended Australian golf star Daniel Nisbet has fired out his first warning shot to rivals since being handed a controversial 18-month ban for possession of a prohibited substance.

Speaking exclusively with Golfer Pacific editor Brad Clifton, Nisbet declared he is aiming to come back ‘bigger and better than ever’ and prove to those who have bravely written him off that he is far from a spent force. 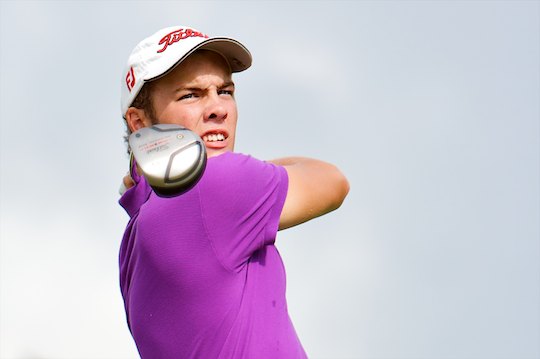 “I want to come back bigger and better and make a statement, for sure,” Nisbet said.

“I don’t think I really appreciated the opportunities that I had when I was playing, with all the travel involved.

“I think as (elite) golfers we are all guilty of that and take it a bit for granted. But having some time at home has helped me realise that.

“Now I can’t wait to get back and be more relaxed.”

The country’s finest amateur player had his world rocked six months ago when the Court of Arbitration for Sport (CAS) hit the Caboolture prodigy with an 18-month sanction that was acknowledged by the Australian Sports Anti-Doping Authority (ASADA).

The Australian Customs and Border Protection Service stopped Nisbet at Brisbane Airport on August 10, 2009 and seized a product in his possession listed as containing Norandrostene.

Nisbet was at the peak of his powers at the time and returning home from amateur competition in Canada when he was swooped on by Customs officials and the matter was referred to ASADA as a possible violation of doping rules.

Subsequent analysis of the seized product confirmed the presence of the banned substance dehydroepiandrosterone (DHEA).

The CAS later heard the substance was for a ‘non athlete friend’ and in deciding to impose a reduced 18-month sanction, stated that Nisbet’s conduct ‘was not aimed at cheating in his chosen sport’ and that he fully cooperated with the investigating authorities. But the punishment stood and ensured Australia’s No.1 ranked amateur in 2009 would be ineligible to compete in any national and international sports that had adopted the World Anti-Doping Code until midnight on May 24, 2011.

Six months into his suspension, Nisbet told Golfer Pacific he was far from upset with the unfortunate situation.

“I’ve been playing a bit in Saturday competitions and with my mates in club championships – golf has been a lot of fun for me lately,” Nisbet said.

“I haven’t been shooting the lights out but I’ve been playing enough in between my work schedule to make sure I stay committed to making golf my career.”

Nisbet has been keeping busy working part-time bar shifts at the Caboolture club and with a local construction company.

And while admitting the suspension was hard to accept, Nisbet revealed any thoughts of appealing the ban were quickly laid to rest.

“There’s only so much you can do when the decision has been made,” Nisbet said.

“It’s a catch-22 situation – you think ‘Do I spend a lot of money to fight it, or just take it and see what it brings?’

“Once it got to the decision stage I knew my fate and just accepted it.”

And with 12 months left to serve before he can once again shine in the national and international spotlight, Nisbet pledged to increase his training regime to ensure his rivals will be counting down the days until they will be playing for second once again.

“I’ll be putting in around seven to eight months solid training with my coach Ian Davis, who has supported me all the way through this,” Nisbet said.

He also thanked his girlfriend and fellow Queensland amateur star, Ashley Ona, who has been right behind her man through some trying times.

“Ashley’s support has been wonderful,” he said.

“And if there’s been one positive to come out of this it’s the fact I have been able to spend more time with her and actually have a relationship as opposed to being on the other side of the world.”