‘Terrible’ McIlroy to join One Direction on stage

He didn’t make too many decisions on club choice when he caddied for Rory McIlroy.

Yet One Direction singer Niall Horan will have to endure McIlroy making the choice when he returns the favour by going on stage with the group later this year. 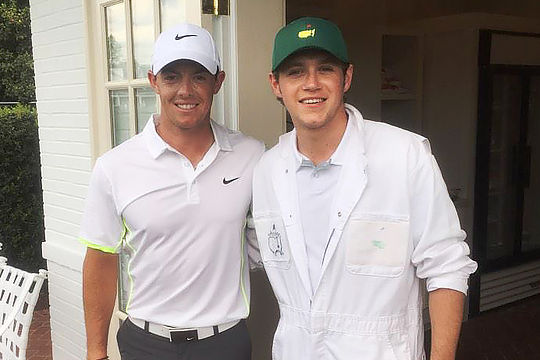 For those who missed the action, Horan carried McIlroy’s bag and was even given the honour of hitting a tee-shot during the traditional Par-Three tournament at The Masters recently.

And in return the world’s No. 1 golfer has agreed to perform with One Direction later this season – as long as it doesn’t interfere with the FedEx Cup Playoffs, where he expects to figure prominently.

If the plan works, McIlroy will take to the stage at the Gillette Stadium in Foxborough, Massachusetts on September 12.

“That was part of the deal,” said the young singer.

“If I went on the bag with Rory, he would come on stage and sing with us.”

“He’s playing in the Deutche in Boston at the end of the summer and we’re playing in the Gillette Stadium in Foxboro the same week, so we going to get him up [on stage].”

“He said if he’s allowed pick the song then he’s going to do it.”

When Horan was quizzed about whether or not he had heard McIlroy sing he said:

“No, but apparently, he’s terrible.”