Thailand’s Atthaya Thitikul has moved to the top of the Rolex Women’s World Golf Rankings this week becoming the second youngest player ever to achieve that feat behind Lydia Ko.

In her ascension to World No.1, Thitikul knocks off long-time leader, Jin Young Ko, who has held the spot since January this year and 152 weeks overall. The South Korean falls just six weeks shy of Lorena Ochoa’s record 158 week reign. 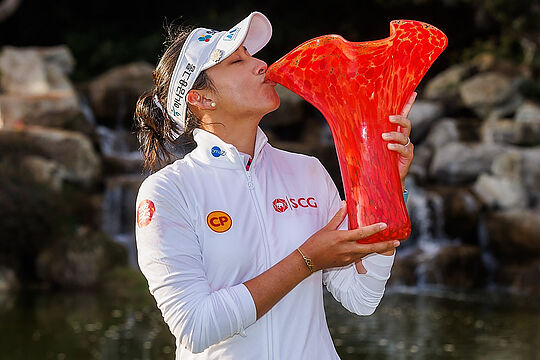 “It means a lot for my team, my family, my supporters and myself. It is such an honour to have my name at the top amongst the biggest names of the game,” said Thitikul.

“It is very special to get to the top but it is much harder to retain it. I still have a lot to learn from all the legends and current players both on and off the course. I will continue to work hard for my family, my team, my fans and my country.”

LPGA rookie Thitikul has won twice this year including the JTBC Classic and the Walmart NW Arkansas Championship along with12 top-10 finishes. She leads the LPGA’s Rookie of the Year standings on 1,487 points, is third in scoring average on 69.432 and fourth on the Rolex Player of the Year standings with 129 points.

The 19-year-old isn’t a flash in the pan either. At 14, she became the youngest golfer ever to win a professional golf tournament with victory at the 2017 Ladies European Thailand Championship, which she repeated again in 2019.

In 2021, she won another two events on the LET, which saw her win the Ladies European Tour’s Race to Costa del Sol along with Rookie of the Year and Player of the Year honours.

Thitikul follows in the footsteps of fellow Thai Ariya Jutanugarn, who spent a total of 23 weeks on top of the world rankings from 2017 to 2019, winning 12 LPGA titles along the way.