The day Lara asked to join me for golf

Brian Lara – it’s a name synonymous with cricket as the man many call ‘The Prince’ was just one of two players who scored more than 10,000 Test runs and probably a similar return in One-Day cricket.

But to bump into one of cricket’s all-time greats on a golf practice range in the Middle East – no chance! 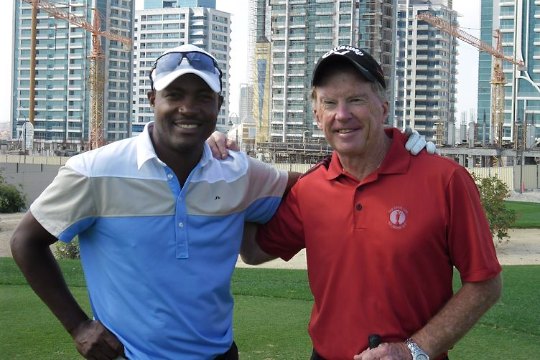 It was Monday of the Dubai Desert Classic week and fellow Australian Darren King, who works as a director of golf at the Els Club, had invited me to play the course.

I arrived in the company of a French-born colleague and after being met by Darren we headed to the practice range to warm-up before a round on the Ernie Els-designed layout at Sports City in Dubai.

There were just three people on the range, with one person, on the far left meticulously working on his swing.

Before long he took a break with lunch brought out to him by one of the Els Club catering staff, and it was then that I asked if he had his game “all sorted”.

Wearing shorts, cap and sun-glasses our intrepid golfer merely responded: “Where in Australia do you come from?”

“Oh, I have a daughter named Sydney”.

The penny was beginning to drop but I naturally still asked where do you come from?

“Trinidad and Tobago,” was the response.

I then commented: “Ah! I was sitting the stands at the Sydney Cricket Ground the day you scored that 287″.

Brian Lara quickly corrected me: “It was actually 277″.

“Pretty close, and I now know why you called your daughter Sydney”, I said.

We got talking with Lara indicating he was in Dubai as a batting consultant with the Zimbabwe World Cup cricket team at the nearby Dubai Cricket Stadium.

We were minutes away from teeing-off and Lara asked me if he could join the pair of us for a few holes.

We got talking, as you do in golf, and I established his favourite clubs in Australia were the New South Wales Club in Sydney while he also enjoyed Royal Canberra.

I observed during the eight holes we played that he marks his ball with a casino betting chip, but learned that he also lost $20 when playing with Lee Westwood.

A few days before taking to the Els Club, Lara shot a 76.

“I was level par after 17 holes but doubled the last,” he said.

Also during the round, Lara was asked by an Indian-born member of the greens-staff if he could have his photo taken.

So to also delight the worker I said I would take the snap of the pair.

He also enjoys the Test record of scoring the most number of runs in a single over in a Test match, when he hit 28 runs from an over by South African-born Robin Jackman in 2003.

In December 2006 Lara became the first player for the West Indies to pass 10,000 one-day international runs.

Lara and India hero Sachin Tendulkar are the only two players to do so at Test and one-day levels.

In April, 2007 Lara confirmed his retirement at the close of the 2007 Cricket World Cup before shortly retiring from all forms of cricket.

And since retiring from cricket, golf has become a big part of his life.

He plays off a handicap of five and is a member of the St. Andrews Club in Trinidad.

He’s played with Els, Westwood and Colin Montgomerie and also revealed he’d put off a return trip home to Trinidad and Tobago just to watch up-close the world’s top-three ranked golfers in action.

So after seeing off the Zimbabwe team to Bangladesh and India, I was able to organise Dubai Desert Classic organisers tickets and to allow Lara permission to walk with me inside the ropes with the three-ball of Tiger Woods, Martin Kaymer and Westwood.

In fact, Lara spent all four days at the Classic.

Being a good friend of Westwood, Lara had quietly commented to the Englishman during the opening round of the event ‘that was a good birdie’ as Westwood walked to the next tee.

Westwood was surprised to see Lara at the event and spent the next couple of minutes on the tee talking with the West Indian.

However, while it was the world’s top three everyone had come to watch, Lara still found he was unable to get away from the spotlight and was frequently being asked for an autograph and a photograph, even though cameras were not allowed during tournament competition.

“I just love playing golf and I just jumped at the chance to come here to the Dubai Desert Classic,” said Lara.

“It’s been fun to get up so close to Lee and Martin and Tiger.

“It’s just amazing how far they hit the ball and their skill around the greens is remarkable, so I am trying to pick up a few tips to help my own game.

“I’m an avid golfer and I read a lot and I listen to what they have to say.”

I played eight holes of golf and four days bumping into and chatting with one of the superstars of cricket.