When the late, great Bobby Jones donated his championship medals to the US Golf Association there was one missing. 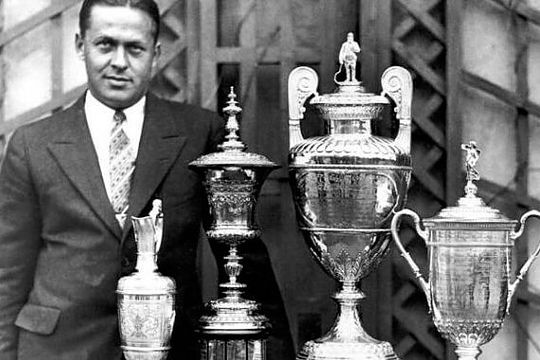 In fact Bob Jones IV (his grandson) didn’t even know that the medal was officially missing…because his wife had it the whole time.

Indeed Jones IV’s grandfather had given the medal to his grandmother, Mary, to wear on a chain around her neck.

The medal, which is slightly larger than a silver dollar, carries a crest of the Southern Golf Association while the back is engraved in 14-carat gold with the words: Open Championship, Atlanta, March 1927, Won by Robert T. Jones Jr., 281 strokes.

Then one day, Jones and Mimi walked into a reception and she happened to be wearing the medal. A good friend, Sidney Matthew, a Florida lawyer who is one of the foremost experts on all things Bobby Jones, immediately took notice.

Jones was nonplussed by Matthew’s reaction: “Sid, I appreciate your enthusiasm, but I have no idea what you’re talking about,” the clinical psychologist remembers saying.

“And he told me, we have been wondering for a long time what ever became of that Southern Open medal from 1927.”

“And I said, well, you obviously didn’t ever ask me, or I could have told you that it was around the neck of my wife at any major golf event.”

“He was just blown away by it.”

Jones doesn’t know why his grandfather kept the medal, but he does have a couple of ideas. One, he felt strongly about his Southern heritage and the Southern Golf Association.

And two, the eight-stroke victory came at Jones’ home club of East Lake, where the 63 he shot in a practice round had everyone buzzing.