The Shark reveals secrets to his success

It’s not rocket science and former world No 1 Greg Norman admits he doesn’t even have a formal business education.

Yet the two-time British Open champion has become one of the world’s greatest sporting businessmen and his brand name is iconic wherever he plies his trade. 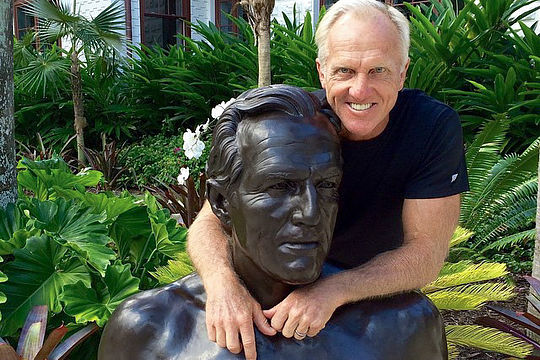 And his products are many and varied from wine, to turf, to clothing, to beef steaks and even eyewear comes under his banner, Great White Shark enterprises.

Now the man whose logo, the Shark, has become as well-known as he is, has revealed some of the secrets to that extraordinary off-course success.

“I’m self-made and I had to perform week-in and week-out on the golf course to get where I am,” says Norman.

“You can’t achieve success by giving up or settling for anything short of greatness. It comes to those who truly work for it.”

“And if you are lucky enough to reach the top of whatever you do, then you actually have to work harder, because everyone underneath you is gunning for you.”

“There’s no option to quit.”

Obviously Norman’s skill on the golf course carried him a long way: He quickly learned that people soon recognised the influence he could have.

“The corporate world wanted to put patches on my shirts, wanted me to drive their cars, drink their beers, carry their golf bag and so on,” he said.

“But most importantly, I learned that I was a pass-through entity at my management company. Sure, you sign a deal to wear a logo, but no one builds equity in your brand.”

“You actually probably don’t even have a brand at that point. You are just an athlete performing each week.”

And while luck also played a huge part in Norman’s path to success – even to the point of how he earned the nickname, the Great White Shark, he eventually came to realise the nickname given to him by the press at the 1981 US Masters would eventually be his brand.

“None of this happened overnight. You have to fully commit to whatever it is that you want to do and surround yourself with the right people who believe in your vision.”

“You also have to have fire in your belly, passion in your heart and never rest on your laurels.”

Norman said he also knew that he wanted to invest in himself and build equity in his brand.

I’d say he’s done a pretty fair job of that.