While it’s never a good idea to hit golf balls inside your house, perhaps a 15-time European Tour title winner could be forgiven for thinking they could get away with it.

But it seems even someone with the credentials of Thomas Bjorn can make mistakes. 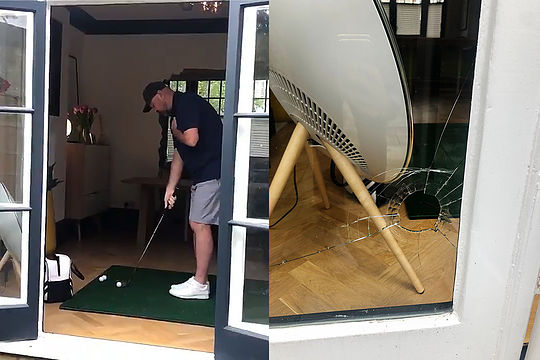 Thomas Bjorn’s Before and After chipping attempt

The 49-year-old, who captained the European Ryder Cup team to victory in 2018, was filming a chipping segment from inside the back door of his house, which is lined with glass windows.

The ball was meant to head straight out the open back door but a rusty swing from the Dane meant that it headed straight for a window pane sending the camera operator quickly ducking for cover.

“When you try and film a @CallawayGolfEU Tour Tip but you haven’t picked up a club since Feb!” tweeted Bjorn after the incident before following up with an image of the broken window.

“And here’s the end result!”

Of course his fellow pros were very quick to offer their reactions while Bjorn’s fans praised the shot for making all of us amateurs feel just a little better the next time we flub a similar shot.