With his first victory of the year coming at the rain-shortened Barclays at the weekend, the message is loud and clear for Tiger Woods: There’s a new cat on the prowl.

Despite two Major setbacks, the golfer nicknamed ‘Cheetah’ again sharpened his claws by snaring a share of second at this year’s British Open. 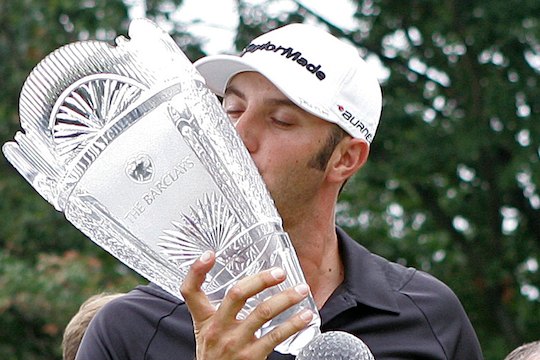 Australians will get their first look at one of the game’s more athletic players later this year in the Australian Open and the Presidents Cup.

And as Bernie McGuire reports, Dustin Johnson learned his lessons and he’s got his sights set on a Major kill.

There’s a leaner, meaner and fitter big cat on the prowl in the golf world.

Nicknamed ‘The Cheetah’, Dustin Johnson has taken to stalking the fairways of the world with a game and demeanour not seen since Tiger Woods got so use to mauling the opposition.

It was close friend Nick Watney who labelled Johnson ‘Cheetah’ and what an apt nickname because here’s a tall, strapping young man with a big cat walk to match.

Johnson belts the ball a country mile and he goes after it as though the golf course was his own personal hunting domain.

The 27-year-old knows no fear or inhibitions, and maybe that’s the result of growing up in a fractured home as he learned fast, took the knocks but also gave back as much as he received.

Johnson once dabbled into basketball but it was the lure of golf that excited the South Carolinian, so much so he’s emerged from the pack as the hungriest to devour the golf world.

In his short four years in the play-for-pay ranks, Johnson’s stamped his enormous presence winning the Turning Stone Resort Championship (2008), AT&T Pebble Beach Pro-Am (2008 & 2009), the BMW Championship (2010) and most recently 2011 The Barclays.

We watched Johnson play the British Open final round with Darren Clarke and eventually sharing second place with mentor and regular practice round partner, Phil Mickelson.

Johnson’s share of second at Sandwich was his best in a dozen Major appearances.

However there’s been two Major Championship golf courses and each washed by two different bodies of water continuing to stick like a thorn in Johnson’s paw’s – Pebble Beach and Whistling Straits.

Twice last year, Johnson stood close to the pinnacle of Major Championship glory but twice Johnson had the victory rug pulled out from under him.

On Father’s Day 2010, Johnson walked onto the first tee on the final day of the US Open leading by three with just a round to play.

But on the occasion of the 2010 US Open, Johnson imploded, shooting an 82 to finish well down in eighth behind Graeme McDowell.

Fast forward to August and the only difference between Johnson winning the US PGA Championship was a thin line in the Whistling Straits sand.

With a few holes to play in the year’s final Major, there was as many as six players all within a stroke of the lead, and a day when either one of the six would become a first-time Major Champion.

Germany’s Martin ‘Kool Hand’ Kaymer would win the Battle of Whistling Straits but the story of the day belonged to Johnson.

For starters, Johnson’s had faced down almost every opponent that week and was within a stroke of winning a first Major, and making amends for his Pebble Beach meltdown in the best manner possible.

But Johnson was smacked hard by the rules book, and it was an encounter that seriously mauled ‘Cheetah’.

You could also blame a golf course set-up likened to the links gems of Ireland but featuring bunkers lying well behind the spectator line.

And in Johnson’s case a bunker that had been trampled down all week, and was littered on Sunday with candy wrappers and other spectator refuse.

But the blame lay entirely with Johnson as notices about the clubhouse highlighted that the 900 odd bunkers either side of the ropes were in play.

To set the stage: Johnson had birdied the 16th and 17th holes to move into the lead at 12-under par but then had the crowd scattering with a wild drive down the right side of the 18th.

The American missed then missed the green with his next before chipping to six feet for a putt to win a Major Championship.

Johnson missed and his bogey and score of 71 sent him into what he thought would be play-off with Kaymer and Bubba Watson.

But as Johnson headed to the scorer’s hut, a rules officials walked up to him and putting an arm around his shoulder.

He then had to face a gut-wrenching 15-minute interrogation and trial-by-video to establish if he had in fact grounded his club in the bunker.

Johnson duly accepted a two-shot penalty but it was a rules decision that brought loud ‘boos’ from the crowd gathered around the last.

Mike Wilson, co-Chairman of the PGA of America Rules Committee explained that ‘Supplementary Rules of Play’ notices had been placed in the locker room and around the clubhouse explaining all 900-odd bunkers either inside or outside the ropes were in play.

“It is unfortunate for Dustin but we did go over the rules sheet for him while he was also invited to look at footage of the incident but he declined to do so,” said Wilson.

“Unfortunately when a player is in one of the bunkers and does ground his club, it is a two-stroke penalty.”

The decision sent Johnson from a share of the lead and into an eventual tie for fifth on nine-under par after having to sign for an 18th hole triple bogey and a score of 73.

Many pointed the finger at Brown but Johnson wouldn’t hear of it.

“I don’t blame anybody for anything I do,” said Johnson.

Johnson was much the same on the Sunday night after losing the US Open. He drove up to San Jose, caught a redeye commercial flight home, and slept the whole way without a seeming care in the world.

“Dustin just shrugs off things like that and moves on. He doesn’t stop to think about things too much. Everything he goes through prepares him for his next challenge.

“What happened to him at the US Open helped him when he went to Chicago, when he was slower, more calculated coming down the stretch.”

Johnson’s BMW Championship victory at Cog Hill cemented his place in the USA Ryder Cup side.

It had only been four years earlier when Johnson was picked to represent the Stars and Stripes in the 2007 Walker Cup side at Royal Country Down.

Among his team-mates was Rickie Fowler and on a losing GB & I team was Rory McIlroy.

Johnson went to Wales late last year with the American Ryder Cup side and somewhat made amends in a defeated team by topping Kaymer 6 & 4 in the final day singles.

The New Year for Johnson began with rumours he was linked romantically with LGPA pin-up Natalie Gublis.

But whether Johnson got cold feet or Gublis got hot under the collar at Johnson’s suggestions he ‘would handle the PR’ no one will know.

Then in February, Johnson was slapped with yet another two-stroke penalty for turning up late for his tee time at the Northern Trust Open at Riviera.

But in running up a hill to catch-up with playing partners, Steve Stricker and D A Points, the ‘Cheetah’ pulled something in his left hip.

Again, the finger was pointed at his caddy so Johnson reacted by sacking the bagman.

When Johnson went to Royal St George’s little was known of the American other than what went on last August at Whistling Straits.

But the manner in which he conducted himself over the four days in golf’s oldest Major earned Johnson a whole new respect. Here was indeed a golfer with the game and demeanour who could play the game at the highest level.

Yes, he had cocked-up along the shores of Lake Michigan but along the Kent shoreline ‘Cheetah’ walked proud.

“I’ve been in a few unfortunate situations and it gives me a lot of confidence when I can put myself in positions like Royal St George’s, and be in the last group on a Sunday, and with a chance to win a golf tournament,” he said.

“It’s always my goal every week to give myself a chance or put myself in a position to win on Sunday.

“But all you want to just have that chance. If you’re in the situation where you’ve got the chance, then you’re doing everything right.”

‘Cheetah’ has enjoyed five quick kills on the PGA Tour, played in a Ryder Cup side and got himself in position to capture two Majors.

Get used to seeing this new cat strutting his stuff.