Tiger opens up about life, golf and his family

Indeed as Tiger Woods arrived to play host at his own tournament, the Hero World Challenge in the Bahamas, he actually gave any potential rivals cause to sigh with relief – at least in the short-term. 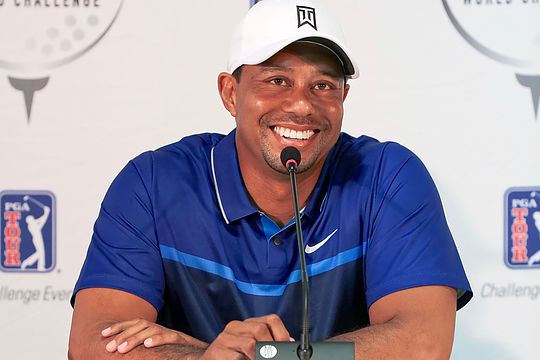 Tiger Woods talks to the media at the Hero World Challenge (Credit: www.golffile.ie)

For the moment, Tiger admits video games get more attention than golf courses.

The latest operation, his third back surgery, has Woods a bit down because he’s used to getting himself feet-first into rehabilitation.

Not this time though.

“They’ve said I cannot do anything, can’t even start any rehabilitation, until I get their go-ahead,” said Woods. “And we’re just not sure when that will be. There is no timetable.”

When asked what functionality Woods did have he said he simply walked – and then he walked some more.

“I am really good at playing video games, really good,” he said. “I swear, that’s basically how I pass a lot of my time.”

And while the conjecture remains as to whether Tiger Woods will ever be the Tiger Woods of old, he probably laid that argument to rest was well:

“I think pretty much everything beyond this will be gravy,” he said.

“For my 20 years out here I think I’ve achieved a lot, and if that’s all it entails, then I’ve had a pretty good run. But, sure, I’m hoping that’s not it.”

Obviously with 14 major championships and 79 PGA Tour events, Woods feels he has nothing to prove to anyone.

And he has admitted he now sports an over-riding desire to watch his two kids, Sam and Charlie play sport – and grow up – and that now holds sway in his life.

“To watch my kids and play sports and to grow up and participate, and even teach them how to become better gives me so much joy,” he said. “I can’t imagine not being able to do that as I get older.”

So when exactly will we see Tiger Woods back in action?

“Anyone I’ve ever talked to who has had procedures like I’ve had, they say the same thing: you don’t know,” he said.

“The most important thing, though, is that I get to have a life with my kids. That’s more important than golf. I’ve come to realise that now.”