Of all the things I thought I would see on Instagram last week, a smiling Tiger Woods in his backyard on crutches beside his dog, Bugs, wasn’t high on the list. 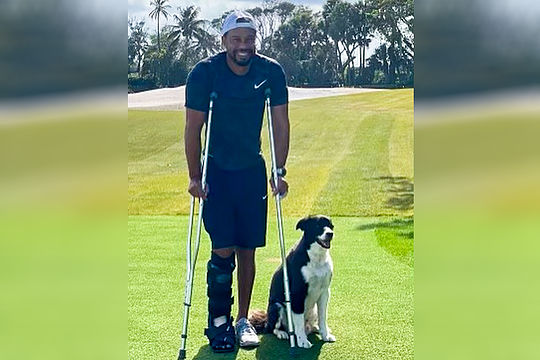 “My course is coming along faster than I am. But it’s nice to have a faithful rehab partner, man’s best friend,” posted the 45-year-old on his Instagram account.

The former World No.1 hasn’t been spotted in public since his near-fatal car crash in Los Angeles in late February.

Crash investigators found Woods was travelling up to twice the speed limit in a well-known black-spot area of LA.

“The primary causal factor for this traffic collision was driving at a speed unsafe for the road conditions and inability to negotiate the curve of the roadway,” said Sheriff Villanueva.

Interestingly the image comes just a couple of weeks after an aerial picture was posted to Twitter showing Woods’ entire practice area at his Jupiter Island home in Florida being completed renovated.

Fans were quick to jump to conclusions so it’s possible Woods took the time to alleviate some of those concerns with his post.

The 15-time major champion has yet to comment on the true extent of his injuries and whether or not he will ever be able to play at a professional level again.