For the second time in a few days, Tiger Woods has singled out Rory McIlroy for special praise.

First Woods was very complimentary of McIlroy’s leadership qualities in taking the PGA Tour fight virtually single-handedly to LIV Golf and now on, Woods has singled out McIlroy’s swing. 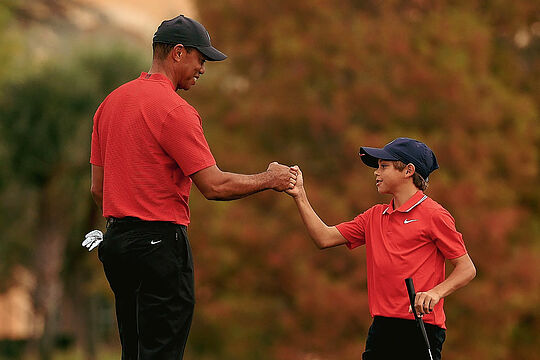 Woods, who withdrew from his Hero World Challenge, was speaking with NBC Golf during their coverage from the Albany course in the Bahamas, and with Woods being asked a variety of questions while the action was taking place on course.

GolfByTourMiss has already reported Woods speaking of his determination to get back to formal competition and not only become the winningest golfer in the history of the PGA but also to land ‘another big one’, with Woods, of course, referring to a 16th major championship.

And now amazingly Woods has commented on McIlroy’s swing and suggests his 13-year-old son Charlie copy the swing of the current World No. 1 Northern Ireland-born McIlroy rather than his own 15-time major-winning father.

“So, you can swing it as hard as you want but Rory just seems to have the perfect all-round swing.”

“Charlie and I do the same things on a golf course, and just like you see all the champion fathers and their sons. They emulate the fathers as Raymond Floyd’s son, Robert hits the ball like his father. I used to also jump-up off the ground as they all seemed to do that but then they teached me out of do that.”

Woods was then asked about how much he has had to change from lower body action to more upper body?

“When I was growing-up, I was lucky enough to also like baseball and playing a bit of baseball helped with my development in playing golf. So, I played baseball using my right leg a lot as you do in the game and drawing on that very much in playing golf. Nowadays, I do you a lot more of my upper-body than relying more so on my lower half.”

“My legs, as we know, just don’t have the spring they used to have.”