That’s the amount it’s claimed Woods has been paid to design a signature golf course in Dubai. 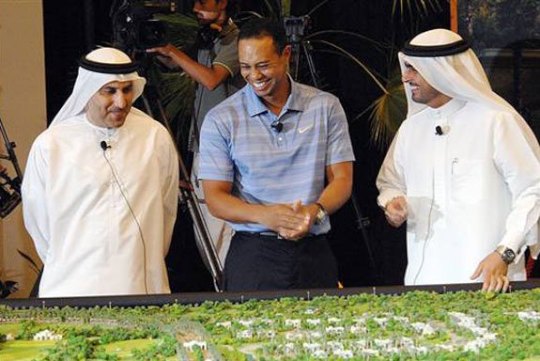 A fortnight after Tiger Woods Design was set-up in November, 2006 following the then world No. 1′s visit to Dubai, it was announced ‘Tiger Woods Dubai’ golf course would open in late 2009.

The original plans for a $US1.1 bn project spread out over 55 million square feet that would include a Woods signature-designed course, a golf academy, boutique hotel and 287 luxury villas and mansions.

The golf course would be a par-72 championship layout measuring 7,700 yards with water features while around 11,000 trees were to be procured and 1,500 yards of grass would be brought in from the US.

It was anticipated about 14,000 labourers would work on the construction of all facets of the project.

Work began on the project in June, 2007 and a month later an official preview of the course layout was available for buyers to view.

But according to Arabian Business in August 2008, Woods and his team were planning changes.

The magazine reported that on August 22, 2008, Woods signed a new deal with Tatweer, the UAE property developer that contained 15 new clauses to supersede the original contract.

Basically, it provided Woods a guarantee of being paid US$55,416,887 and to be paid within 10 days of signing the contract.

Another clause in the new contract would guarantee Woods a further US$28,800,000 if a second project went ahead and if so, the amount would be paid as a one-off fee.

But less than a month after signing this new deal the ‘Economic Crash’ hit Wall Street that created a huge knock-on effect in construction crazy Dubai.

In March, 2009 the developers of Tiger Woods Dubai admitted they were facing problems so much so the original September 2009 deadline for completion was scrapped.

“The decision was based on current market conditions that do not support high-end luxury real estate,” it said in a statement.

The statement continued: “We maintain a good relationship with Tiger Woods and his organisation and will retain our commercial agreement together.”

The subject seemed a sore point with Woods when he attended a pre-Omega Dubai Desert Classic press conference.

A representative of Arabian Business was present and asked Woods: “Whether or not he had signed an amended contract with Tatweer on August 22, 2008.”

Woods responded: “No, I’m not going to talk about that, sorry”.

However the reporter tried once more with Woods saying: “Sorry, I’m not going to, sorry.”

As Woods left Dubai this year, just six holes at Tiger Woods Dubai had been completed.