Despite Tiger Woods still recuperating at his home in Florida, the video series he recorded in late February and just a day before his near-death car accident, is now heading to a TV, mobile phone or tablet near you.

The series, A Round with Tiger: Celebrity Playing Lessons, was launched this week on Golf Digest with the first instalment featuring actress Jada Pinkett Smith.

“The content was captured in February, the day before Tiger had his unfortunate car accident, from which he is still recovering.”

“The series is being released with the blessing of Tiger and his guests. Discovery and Golf Digest thank everyone for their involvement and wish Tiger a continued speedy recovery. 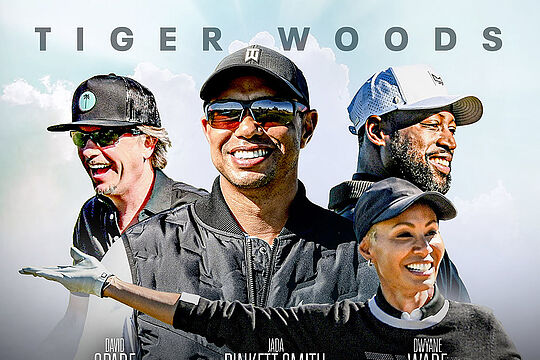 A Round with Tiger: Celebrity Playing Lessons (Credit: Discovery)

The timing seems a quick given how close the accident came to claiming the life of Woods but with commercial realities to consider, and a short shelf life on these types of projects, it’s not surprising to see the series hitting the airwaves while the 45-year-old is still recuperating.

“Shooting this series was some of the most fun I’ve ever had filming on the golf course,” Woods told Golf Digest.

“Each guest brought a unique perspective on life, both professionally and personally. I’m always inspired by others who are considered the best at what they do and learning about how they made it to the top.”

Next up on the schedule will be NBA All-Star Dwyane Wade (July 27) and comedian David Spade (August 3) followed by a fourth and final episode (August 10) featuring behind-the-scenes clips and outtakes.

“I was pleasantly surprised by Jada and David’s golf games, and Dwyane, who just picked up the game, made a lot of progress in the time we spent together. Each episode provides something that everyone can enjoy and learn from, so I’m happy to share these lessons and conversations with the world.”

While the content is a little heavy on the American sap-o-meter, anything featuring one of the greatest of all time handing out golf tips will no doubt appeal to Woods’ millions of worldwide fans.