Could this be the start of a second Woods dominating the golfing world with Tiger Woods’ 11-year-old son, Charlie cruising to a five-shot victory in a recent US Kids tournament.

The 15-time major-winning Woods caddied for his son at the Hammock Creek Golf Club in Palm City, Florida. 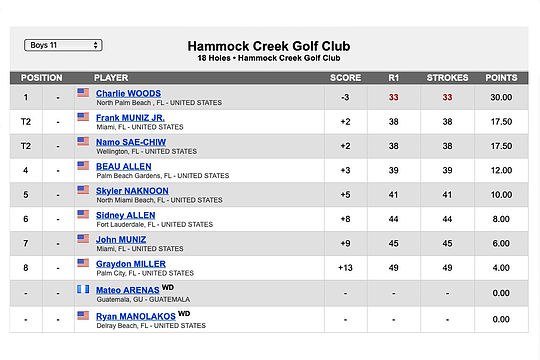 Charlie Woods cruises to 5-shot win at US Kids event

Charlie Woods won the nine-hole event in the boys 11-year-old division with a 3-under 33 on the 2,467-yard course.

It was also a bogey-free nine holes.

And Woods, who this week tees-up in the Northern Trust, indicated he wished he had his son’s mechanics and flexibility.

“I wish I had his move,” said Woods in a recent interview with GolfTV.

“I analyze his swing all the time. I wish I could rotate like that and turn my head like that and do some of those positions, but those days are long gone, and I have to relive them through him.”

Last month, Woods told GolfTV his son was getting more serious about the game.

“He’s starting to get into it,” Woods said. “He’s starting to understand how to play. He’s asking me the right questions. I’ve kept it competitive with his par, so it’s been just an absolute blast to go out there and just, you know, be with him. It reminds me so much of me and my dad growing up.”

And just think, Charlie is only nine years shy, if he should choose, of turning professional as his illustrious father had done in late 1996 at 20-years-old.