Tory pines for a golfing career

The parents of 14-year-old Tory Edmistone may be churning out the kilometres in search of a golfing career for their daughter, but they say the efforts are well worthwhile.

Tory recently won the Blackwater Junior Open Championship with a two over 72 – which included her first competition eagle – and now has her sights set on Queensland girls team selection in 2013. And her mum and dad are primed to support her all the way. 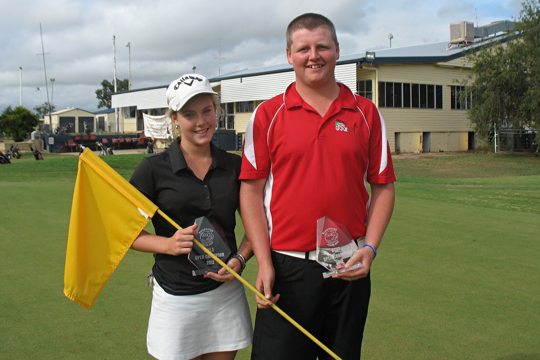 “Tory is a 14-year-old girl who just loves playing golf, so we will encourage her as much as is physically and financially possible,” said her mum Vicki.

“We estimate we travelled around 40,000 last year to take her to the various tournaments, but we think it was worth it. If she wants to have a career in golf, we will give her every chance.”

Tory and her parents live in the Central Queensland mining town of Emerald, but she plays on three different junior golf circuits. The four-marker competes in the northern circuit (as far north as Townsville), Central Queensland (which takes her south to Gladstone) and her home circuit of Central Highlands. And among her many titles last year she was named the CQ junior female golfer of the year.

A grade ten student at Marist College in Emerald, Tory has been playing ‘serious golf’ for just three years but has shown vast improvement in the past eight months under her first professional coach, David Delahunty.

And her coach is suitably impressed.

”Since July last year she has reduced her handicap from 14 to four, which typifies her work ethic,” he said.

“Tory listens, is a hard worker and certainly gets her game face on when the competition starts. She pretty much practises every single day.”

During an impressive past two months of competition Tory has won the Wowan Junior (shooting 75), Baralaba Junior (77), Townsville Junior (81), Rowes Bay Junior (81) and the Blackwater Junior (74).

The boys’ winner at Blackwater was Raymond Foster of Dysart, who shot a 77. Runner-up was Yeppoon’s Caine Hendy (78).