Uihlein singles out Aussie caddy Hayes ahead of debut

A strong key to the success of any professional golfer whether it be Tiger Woods, Rory McIlroy, Dustin Johnson, Jordan Spieth or Peter Uihlein is the strong dependence of their caddy. 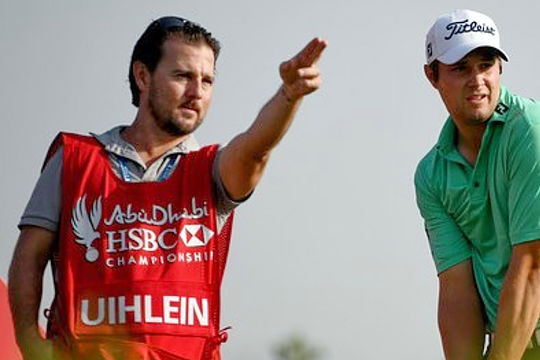 Woods won 13 of his 14 Major Championships with New Zealand-born Steve Williams on the bag while McIlroy won his present four Majors with JP Fitzgerald calling the shots.

The one person who Spieth, and a winner of three Majors, always singles more than any other in his press conferences is caddy Michael Greller.

You only had to know the relationship between caddy and player when Spieth holed a bunker shot to win this year’s Travelers Championship in Connecticut as the reaction between he and Greller was easily worth the price of admission.

A caddy spends more time with a golfer than the golfer spends with his wife and/or family so much so, it is like a marriage as a player and caddy are inseparable and most golfers will confide in his or her caddy closer than a player would share his or her intimate feelings with a spouse.

Uihlein and his Australian-born caddy Ben Hayes are no exception.

“Ben is a great caddy and he is very professional, very straight-forward and this attitude has very much rubbed-off on me,” said Uihlein to renowned Meridan Media’s Denis Kirwan.

“Ben is out on tour, and like all of us, trying to make a living and also provide for his wife and children.

“He is the first caddy I have on the bag with this background and he is the most professional caddy I have had on my bag. The good aspect about Ben is that there is not too many highs and now and our relationship is so strong that he not afraid of speaking-up if I should get down on myself.

“It is like a marriage as you are going to have times when we have our ups-and-downs but then there is also a lot of benefit to having a good player-caddy relationship, so the good thing about Ben he doesn’t take too much of my crap (smiling).

“Ben also is something I have needed on my bag throughout my career, so our relationship has been very good.”

The Florida-based Uihlein also is one of those on the cusp of greatness and it has been the Melbourne-based Hayes helping steer Uihlein to greatness on the world stage.

On his 21st birthday in 2010 Uihlein defeated David Chung in the 36-hole final of the US Amateur. Uihlein also is a former No. 1 in the world ranked amateur.

Since turning pro, however, Uihlein has been plying his trade on the European Tour and capturing his maiden pro career victory in the 2013 Madeira Islands Open and a victory that earned him the prestigious European Tour ‘Rookie of the Year’ title.

I was a year ago when Uihlein teamed-up with Hayes.

Hayes is no ordinary caddy having made the quarter-finals in qualifying for the 1999 Australian Open before heading to Royal Sydney Golf Club for the championship proper only to find himself caddying for leading New Zealand-born Michael Long.

The pair clicked immediately with Long securing a share of third place.Long thought so much of Hayes ability he arranged for him in the Australian PGA before accompanying Long to the U.S.Since then Hayes has caddied for fellow Australians Brett Rumford, Marcus Fraser, the Dane Soren Hansen, American David Lipsky and Aussie Wade Ormsby.

Hayes has always been friendly with Uihlein having got to know him well in practice rounds so when Uihelin returned from a wrist injury the now 39-year old Hayes and the American agreed to work together.

The American had missed the cut in the Australian PGA Championship and arrived in Hong Kong ranked a lowly 297th in the world and looking desperately for something to click, and with Hayes confirming the distance and calling the clubs Uihlein’s game moved-up a big gear.

Uihlein ended a run of three missed cuts and headed to the Christmas break with the early gift of a share of 14th and in the bigger jumped to 271st in the world.

The duo met again early in 2017 in South Africa to finish T7th in the BMW SA Open and the same event McIlroy battled his way to a play-off but heavily strapped due to then unknown serious rib injury that would go to ruin his season.

Uihlein and Hayes were then 5th in the Dubai Desert Classic and 4th in the Tshwane Open before two key invitations on the PGA Tour – T5th in the Puerto Rico Open and T23rd a week later in the Shell Houston Open, and while Uihlein returned to the European Tour he returned to the U.S. and thanks to an invitation from tournament host Jack Nicklaus to tee-up in the Memorial.

While Uihlein eventually shared 25th place he, and with Hayes again on the bag, earned enough prize-money to earn a place in the opening event of the final series on the secondary Web.com Tour, and little did the duo know what effect that event in September would have on their careers.

Uihlein headed back to Europe to then secure the biggest cheque of his pro career, and just a few Euro short of Euro 700,000, in finishing second to England’s Tommy Fleetwood in the French Open and with the effort seeing Uihlein break back into the top-100 on the World Rankings since missing the cut in the 2014 BMW International Open in Germany.

“It’s a good event to finish runner-up, and yeah, it gets me into The Open and it moves me up The Race to Dubai rankings a little bit,” he said.”Any time you finish second in a golf tournament, it’s always a good week.”

With Hayes by his side the road ahead began to look so much brighter.

They returned to the States to contest the PGA Championship and while missing the cut at Quail Hollow there was the Nationwide Childrens Championship in Columbus, Ohio to look forward to and the reward for Uihlein’s early efforts in Puerto Rico and Houston.

Uihlein and Hayes won the event by a shot posting a final round 65 to win by a shot and the reward of full membership on the richest stage in all of golf – the 2018 PGA Tour.

Uihlein, and with Hayes by his side, was asked what was the key to this turnaround in form.

“I’m more consistent, I would say,” he said.”In college I did win a lot, but I was hot and cold, I felt like. But this year in particular with kind of the way I’ve kind of tried to change my game, I’ve become a lot more consistent.

Uihlein contested the three remaining events on the Web.com Tour before making his long-awaited PGA Tour debut as a full member of the Tour, and at the Safeway Open.While he missed the cut he and Hayes crossed the Pacific to finish to-10 in the CIMB Classic in Malaysia before another season highlight in finishing T5th behind Justin Rose in the WGC – HSBC Champions.

“The start to the new PGA Tour wraparound season has been good for Ben and myself and the thing is my status on the Tour means I am subject to a re-rank and the results in Malaysia and China mean I should get into most of the events on the PGA Tour’s ‘West Coast Swing’ early in the New Year.

“So, it means I can pick where I want to play and that should be fine for the ‘Florida Swing’, as well.

Uihlein’s effort in China also saw him move to a career high of 56th in the world.

Uihlein was then T14th a week later in the Turkish Airlines Open before a stomach bug forced him out ahead of the second round of the Nedbank Challenge in South Africa.

He and Hayes boarded the charter flight to Dubai and with Uihlein, despite withdrawing at Sun City, lying 14th on the Race to Dubai.

And in his last European Tour event of 2017 he is T7th heading to the final day of the DP World Tour Championship in Dubai and in what will be also Uihlein’s 118th Tour event ahead of the next exciting chapter in his career.

“Looking back, and given I was competing early in the year under a medical exemption, it has turned into a great year,” he said.

“So, to come here to Dubai and be 18th on the Race to Dubai and now to be only three shots back and in with a chance of ending the year top-10, it has been great year and there is no doubt about that,” he said.

“Everything about my game is better.I have been healthy and that also has been a key while it has been a great step in the right direction as to where Ben and I wanted to get to.

“I am looking forward also to having Ben on the bag in tackling the PGA Tour as he knows of people over in the States that can help show him the ropes and it will be nice for me to be able be at home in Florida.”