He likes doing things a little differently to the mainstream golfers.

Yet the recent Travellers Championship winner in the US Bryson DeChambeau won’t be using a compass again to mark hole locations in his greens book. 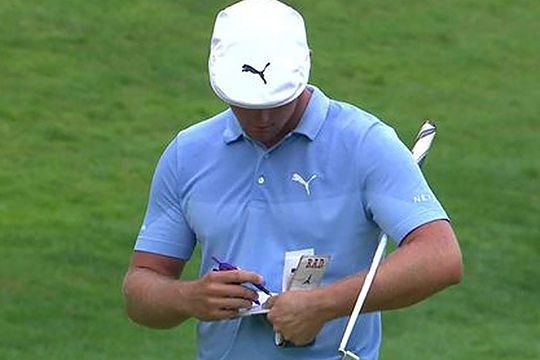 The USGA has ruled the compass was “non-conforming”, meaning DeChambeau can no longer use it just to check on true pin locations before he plays his shots to the green.

Initially the USGA told the American he could use the compass but they’ve since had time to think about and analyse that decision before they informed DeChambeau it was outside the Rules of Golf.

A statement the USGA passed onto players said:

“The USGA has ruled that the use of a protractor (also known as a drawing compass) during a stipulated round is a violation of Rule 14-3a of the Rules of Golf.

“It is considered ‘unusual equipment that might assist him in making a stroke or in his play’.”

While DeChambeau declined to make any comment on his use of the compass, he did say at the Travellers Championship when asked about the compass and its use-

“I’m figuring out the true pin locations,” he said.

“The pin locations are just a little bit off every once in a while, and so I’m making sure they’re in the exact right spot. And that’s it.”

The USGA released a statement to GolfChannel.com which, in part, said: “At the request of the PGA Tour, the USGA and the R & A reviewed Bryson DeChambeau’s stated use of a drawing compass to assist him in determining ‘true’ hole locations, and jointly determined that his specific usage would be in breach of Rule 14-3, if used in a future round.

“The Rule prohibits a player, during a stipulated round, from using any artificial device or unusual equipment, or using any equipment in an abnormal manner, that ‘might assist him in making a stroke or in his play.’

“Because a compass is not a usual piece of equipment in golf, and Bryson clearly stated that he had used the device to assist him, the USGA, R & A and the PGA Tour agreed it was in the best interest of the game to share this determination with Bryson immediately.

“In doing so before his next round, we have made every effort to assist Bryson in avoiding possible disqualification and provide clarity to the PGA Tour and other players in the field.”