Veteran pro Mediate admits to drinking on the job

A few times we’ve all felt like an alcoholic drink or two after three-putting. A strong scotch would be perfect.

Well, veteran US pro Rocco Mediate has revealed he frequently did enjoy a tipple or two when he was playing against some of the best players in the world. 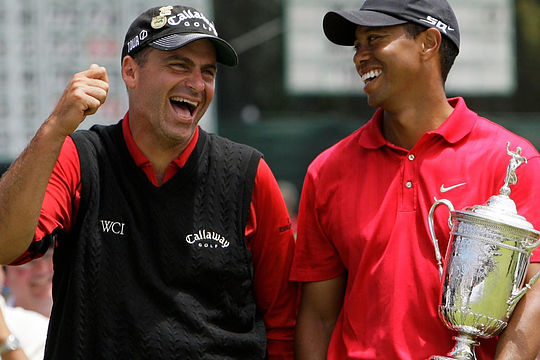 Rocco Mediate with Tiger Woods at the 2008 US Open (Credit: PGA Tour)

Mediate, who was famously beaten by Tiger Woods in a US Open playoff in 2008, described himself as a “habitual alcoholic” in a recent Golf Channel interview in the US.

The popular Mediate has admitted to drinking during rounds on both the US PGA and the Champions [seniors] Tours.

He did have an excuse, well, sort of: Mediate said he turned to alcohol to help cope with a back injury that plagued him for much of his career.

“Absolutely I have [played while drinking],” said Mediate.

“Because it was just normal for me. It was just a daily ritual, let’s say.”

“Was it every time? No. But most of the time when the pain came in, it wasn’t not going to happen.”

It took a poor season on the course to prompt Mediate to do something about it.

That was in October, 2017 and Mediate says his wife helped him kick the habit.

“I couldn’t tell you since last October, years before that, a day I went without having a drink,” he said.

“I knew at the time that eventually it was going to get me.”

“But when it comes to that type of pain, you’ll basically do whatever it takes to be able to go, ‘Oh, that feels better’.”

Mediate won six times on the PGA Tour, with his most recent victory being the 2010 Frys.com Open.

Now 56, he has since won three more titles on the Champions Tour.