Two Central Coast professionals – one a veteran and one a rookie have teamed up this year with a view to tournament success.

It was the veteran, Andre Stolz, who spotted the talent evident in young Toukley pro Dimi Papadatos. 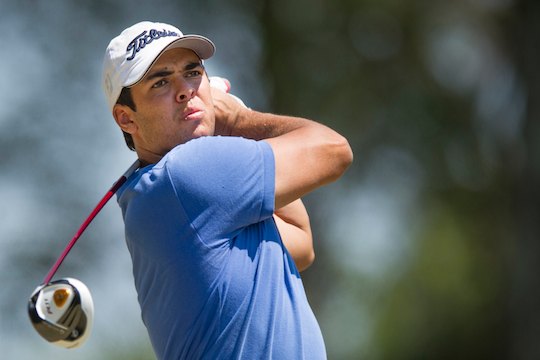 Still it took a wrist injury and subsequent surgery for Stolz to offer his services to Papadatos and advise the young talent how to handle himself both on and off the golf course.

“He lives just up the road from me, about half an hour, but even as an amateur I wasn’t happy with what he was working on,” said Stolz.

“I wasn’t happy with what the coaches were telling him so I said ‘I don’t have much time on my hands but I want to step in. I can’t watch this anymore’.

“We’d played a bit of golf together and it snowballed from there. It got really serious about three years ago.

“I’m doing everything for him at the moment, but it’s only because I’m out (injured) that I’m also caddying for him.

“He has all the tools, I just thought he needed a bit more focus and guidance.”

Stolz, now 44, and a former winner on the US PGA Tour, as well as in Asia and Japan, has been caddying for Papadatos for the past three months while his wrist heals from surgery.

Papadatos is already reaping the benefits and claims to have learned plenty in that short time.

“There are so many new courses that I am playing which Andre has already played several times – and that really helps.”

It was Stolz who talked Papadatos, 23, into turning professional at the beginning of 2013.

He was there again, urging Papadatos to victory at last season’s New Zealand Open, talking daily to the youngster as he destroyed a classy field that included 20 of the Japan Tour’s best.

Stolz says that is only the start: “We’re thinking big and making big plans,” he said.

With talent like that, and Stolz behind him, there is no telling how far Papadatos can go.