Wade Ormsby: Ready for the door to open

Former Adelaide junior golf star Wade Ormsby’s appears to have found his utopia. The young South Australian is now a golf professional, married to an attractive Swedish lady and the couple have a young son.

He now lives in Sweden from where he travels Europe playing golf for a living. 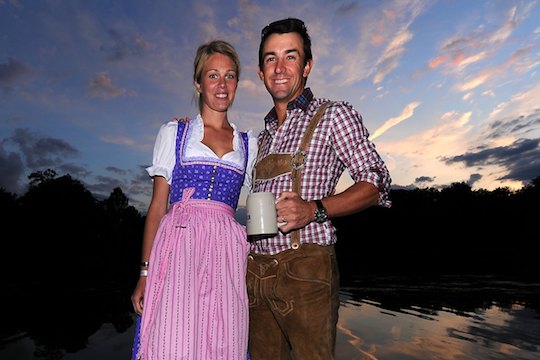 But after a promising amateur career, one of Adelaide’s favourite golfing sons has yet to sample the sweet taste of success in the pro ranks.

But as Bernie McGuire discovered, Ormsby has not for a minute given up on a dream of becoming a tournament winner.

Married to Jenny, a super attractive Swedish woman, and the couple have an adorable young son, Oskar.

The Ormsbys lives at Helsenborg in Sweden from where Orsmby travels Europe as a member of the European Tour.

Ormsby’s got a decent enough golf game and the 31-year old Adelaide-born professional is very much at ease competing alongside some of the game’s greatest players.

But in turning to page 236 of the 2011 European Tour Media Guide there’s one glaring omission from Ormsby golfing CV – and that’s a first pro career victory.

Ormsby’s been a pro for a decade but the closest he’s come to success was finishing runner-up in the co-sanctioned 2007 Blue Chip New Zealand Open, and an event where he produced his lowest-ever round of 63.

This year, Ormsby’s had a mix of three top-20 finishes, two in the 40s and four results in the 50s but he’s also missed the halfway cut in seven of the 16 events he’s contested.

With the Race to Dubai nearing the back straight, Ormsby desperately needs a good result to get himself inside the top-115 and avoid a sixth visit to the Tour’s Q-School.

“I’ve actually played a lot better this year than other years but I’m just not really getting the job done,” he said.

“I know if I can get that one good result then I will be off and running.”

“It just does nothing for your confidence when you can’t put four good rounds together.”

And when asked the highlight of his season, Ormsby was very frank in responding: “There hasn’t been that many highlights though I did play half decent in Wales where I finished 20th.”

“But then I feel as though I have been playing much better than the results have shown.”

“I just need that confidence lift of one decent result and have a few finishes that can go my way which hasn’t been the case.

“I know that I am good enough and it’s not a case of turning up on Thursday just to make up the numbers.

“Besides when my game is on, I am as good as anyone out here.”

“But until the results come, you don’t 100 per cent believe that.”

“Competing on the European Tour is where I want to be and I’m not the slightest over-awed out here.”

“I’ve been back to the Challenge Tour once so I’ve got the t-shirt and I don’t want to do that again.”

“If I have a strong back end to the year I should be fine.”

“I’ve got plenty of tournaments up my sleeve but then as I said I only need one good result.”

It led to Ormsby also being asked if he’d often wondered why his career had not kick-started.

“When I came onto the European Tour in 2004 I had two pretty strong seasons but I just really haven’t kicked on,” he said.

“There’s a number of reasons for that. I had issues with my golf swing like anyone else and that really bogged me down for a few years.

“But I feel as though I’ve definitely turned the corner but then it’s easy to keep doubting yourself after all the damage that’s been done from having those poor seasons.

“It just puts negative baggage in your head.

“And no matter how good you are playing, you just have to try and play good golf to try and dispose of all that negative baggage you’ve accumulated.

“But as anyone knows who plays this game, it can turn around all so quickly, and I feel as though I’ve turned a big corner as I am playing so much better than compared to five years ago.”

However to his credit, Ormsby’s not been sitting idle and is now working with Oslo-based Australian-born coach, Darren Webster-Clarke.

“I’ve always been pretty close to Greenie through our love of motor racing and it was Greenie who introduced me to Darren,” said Ormsby.

“I was struggling when I came back to Europe at the start of the year and with my own coach back in Australia, it made sense to link up with him.

“He’s based in Oslo and that helps because it’s not too far away from where I am based in Sweden.

“Darren’s out on Tour a lot so that always helps.”

Living in Sweden, Ormsby has access to the course and practice facilities at the nearby Vasatorp Golf Club, and it’s the same club where fellow Tour player’s Lundberg and Joakim Backstrom practice.

“The club has given me great access to the course and the practice facilities, and that’s a great plus in terms of my preparation for tournaments and also when I am having time off,” he said.

“There are three great nine holes that are always in great shape and the course is only 10 minutes from home.”

And being close to home has also added a new dimension to Ormsby’s life as a father.

“It’s great and it puts a good spin on my life as that three-putt at the last doesn’t seem so significant when I get back home,” he said.

“Sure, there are a lot of additional pressures because you want to also play well not only for yourself but for the whole family.”

“It’s good in the respect that after playing a tournament I can go back home to be with my wife and young son.”

“And that time at home is always special.”

Ormsby is looking forward to bringing Jenny and young Oskar to Australia this month but unless he achieves the results he seeks, it will mean at least missing out on contesting the Australian Open at The Lakes in Sydney.

Playing the end-of-year Australasian events will all depend on whether or not he holds his European Tour card.

“There’s the Australian Open I would love to play but this year it’s up against the Singapore Open and if I get a start in Singapore then I have to play there,” he said.

“If that happens sooner, and I hope it does, then I will go home and play all the main Australasian Tour events.”