Wait and smell the Azaleas first

The Waverley Club member humbled Scottish hometown hero James Byrne 5/4 in the 36-hole final played over the famed Muirfield course to the east of Edinburgh. 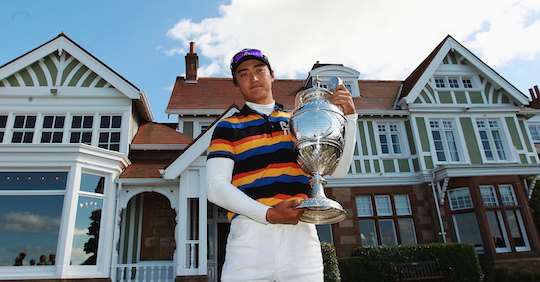 Wait and smell the Azaleas first

Victory earned the 20-year old Jeong a place in the British Open, along with a first round tee-time beside reigning Augusta National champion Phil Mickelson in next April’s US Masters.

But while Jeong was intending to compete at St Andrews, the big decision he faced was whether to remain an amateur to secure his place in the Masters.

Once an amateur turns pro any entry into either the US Masters, US Open and British Open becomes null and void.

“I wanted to win the Amateur Championship so badly so I could play in the Open Championship at St Andrews because I’ve been watching The Open on TV every year since Ernie Els won at Muirfield in 2002,” Jeong told Golfer Pacific shortly after his win.

“That was the first time I’d ever watched The Open and I really wanted to know what it was like to play out of knee-high rough.

“I always hoped that my first Major would be The Open so now I can play at St Andrews.

“The win means everything and it’s a dream come true.”

Jeong has been living in Australia with his parents for the past three years as a permanent resident but is not an Australian citizen – yet.

He became the first Asian to capture the Amateur title plus he leapt nine places on the world amateur golf ranking to become the new world amateur No.1.

Jeong produced a superb display of putting to take the title with at birdie at the 32nd hole, his 10th of the day.

For the first four holes of the afternoon round, the scores remained the same, before Jeong made his move with birdie putts of 30 feet, 12 feet and 18 feet on the par-five fifth, par-four sixth and par-three seventh respectively to build a five-hole lead that would prove insurmountable.

“I was quite nervous all week but I came here this week really wanting to win. I wanted this title so badly.”

However, while Jeong contemplates his future as to whether or not to stay amateur till Augusta, those who have been down that same path each advise: ‘remain an amateur and play Augusta’.

That’s what 2009 British Amateur champion Matteo Manassero and fellow Italian Edoardo Molinari – winner of the 2005 US Amateur – advise, as does Scotland’s Richie Ramsay, who won the year after Molinari.

“There is no question about it as he has to wait and play Augusta,” said Manassero.

“It was a bit the same when I won the Amateur last year but then I was always going to turn pro after Augusta and in the Italian Open.

“Jin may never get the chance to play Augusta for many more years and the experience is just fantastic.”

Molinari became the first Italian to win the US Amateur when he won at Merion in Pennsylvania.

“I don’t know how old Jin is but I was 24 when I won the US Amateur and I knew straight away that I had qualified for Augusta, so I was not going to let that opportunity slip,” said Molinari.

“It’s not only the chance to play Augusta National but it’s staying in the Crow’s Nest and just experiencing everything about the Masters.

“You cannot put a price on that experience, so my advice to Jin is forget about turning pro until after Augusta.”

Since arriving at the Waverley Club, Jeong has been coached by the club’s resident pro Trevor Flakemore.

Flakemore’s been at Waverley for about 20 years and is a former chairman of the Victorian PGA as well as being an Australian PGA board member.

Jeong became the third Korean-born amateur to earn a place in this year’s British Open after Eric Chun landed a St Andrews tee time through the Asian International Final Qualifier in March and Byeong-hun An won the US Amateur title.

“I played the Old Course in May during the week of the St Andrews Links trophy and it was just awesome,” said Jeong.

“It was unbelievable because all the grandstands and scoreboards and everything were already up so to be going back there as a competitor is unbelievable.

“My only concern is that when I play at home in Melbourne I feel as though I have the ball in my control.

“But that was not the case at St Andrews where you get a lot of different bounces and breaks.”

Prior to his Muirfield success Jeong indicated he was planning to head to the Australasian Tour Qualifying School at the end of this year but that could all change now that a tee time at Augusta National beckons.