Wayne Perske: Back On Course

Queensland golf professional Wayne Perske admits he’s been to hell and back since his drug conviction in Japan in 2010, when he was caught with a small amount of cocaine in his possession.

Banned from playing on the lucrative Japan Tour, Perske was also barred from the Australasian Tour for two years. 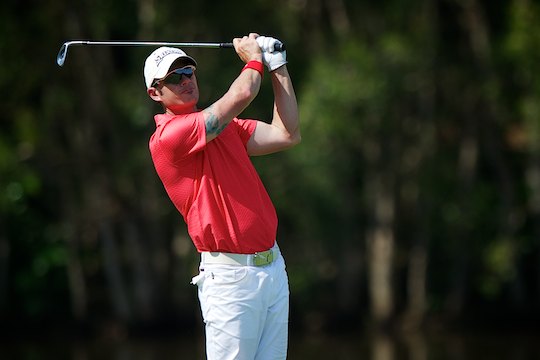 He instead turned to working in real estate and spending more time at home with his young family.

Now the talented Perske is back and earned his first golf cheque for almost three years when he finished tied for 42nd in the Papua New Guinea Open behind New Zealand’s Pieter Zwart at Royal Port Moresby Golf Club.

Yet the money was not important for a 38-year-old who was forced to endure 25 days in a Japanese prison, was later given an 18-month suspended sentence and thought he would never play professional golf again.

That alone was a tragedy for an amazing golf talent who won the 2006 Token Homeate Cup in Japan and played in the British Open that year at Royal Liverpool.

“I had no interest whatsoever in playing golf for a good two years after what happened in Japan,” said Perske, who had banked more than $1.5m since he began playing in Japan in 2003.

“I just did not want anything to do with it. There was more to life than golf.”

Perske explained that he had no lofty expectations now that he was back and having learned from his mistakes, he was determined family would come first.

“I’m just happy to back playing,” he says.

“I don’t care what the prizemoney is.”

“I am not going have such a hectic schedule and spend long periods away from home like before. That was a huge mistake, and I paid for it.”

“My aim now is to earn my card on the OneAsia Tour.”

“I couldn’t bear to go through those times of having my kids hold my leg saying ‘don’t go daddy’ again.”