Over the past 15 years, they’ve become an institution on the LPGA and the fairways of the world but yesterday’s final round of the Japan Classic marked the end of the road for Karrie Webb and her long-time bagman Mike Patterson.

Scotsman Patterson, who is based in Perth, is headed to the PGA Tour with Webb’s blessing and will loop for another Queenslander in John Senden. 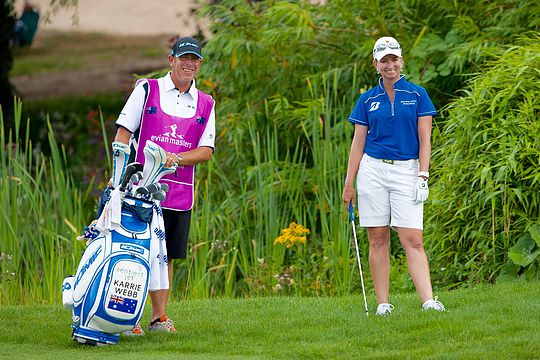 The pair were together for 18 of Webb’s 41 LPGA titles and the bulk of the 13 victories the Hall of Famer has achieved in Australia over the years. Webb posted a heartfelt Tweet shortly after the pair completed their final round in Japan.

“Today was the last round working together for my caddy Mikey Paterson and I.”

“Back 15 years ago I had no idea how great a caddy and person Mikey was. I can never thank him enough for his loyalty, hard work and his friendship.”

“Even through all the highs and lows of the past 15 years I’ve come out with one of the best friendships that I’ve ever had in my life! If I had 1 person in my life that I would know for sure would stand up for me it’s Mikey!”

“He has always had my back on the course and off. We will forever be the best of friends.”

“I wish him all the best in the future and brings whoever he caddies for the all the wins and the best fortune that I’ve had with him! Thanks Mikey!”

Webb singled out the 2006 Kraft Nabisco Championship at Mission Hills as their finest moment together, when she holed a wedge on the 72nd hole to force a playoff in the most spectacular fashion with Lorena Ochoa.

Webb then birdied the same hole to win her 7th major championship.

“I think we were both 10-foot tall and bulletproof the moment the ball went in. Mikey definitely was considering he had the bag on his back and caught me jumping into his arms!” Webb said.