Webb offers her experience to next generation

We always knew she was a special golfing talent and now the woman many rate as Australia’s greatest-ever golfer Karrie Webb has continued to show herself as a rather special human being as well.

Webb won friends worldwide when she began a scholarship in 2007 which saw her bring two young Australian amateurs to the United States each year to learn about the game and how they could forge successful careers. 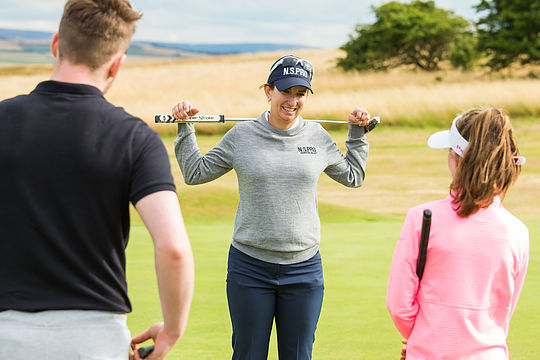 They even get to attend a major championship with Webb so they can see how it’s done.

Yet it’s the way she has stayed in touch with them and tracked their progress that shows what a champion Webb really is.

One such youngster to benefit from Webb’s generosity was Beck Kay, who earned a trip this year to watch Webb in action and learn from the Hall of Fame star.

“The time, effort, support and mentoring Karrie has given me and other amateur golfers is something money just can’t buy,” said Kay.

“The atmosphere of being at a major championship with Karrie is surreal and something that I will never forget.”

“Karrie has given me the opportunity to see how the best players in the world compete, train and handle themselves under pressure.”

Webb admits she feels a bit like a big sister to her scholarship winners.

“I really care about their success,” she said.

Webb explained that she got the idea to help young Australian women after having a similar experience as a young player when she was mentored by Greg Norman and was flown to the US to watch the Great White Shark in action at a tournament.

“I already knew that I wanted to be a professional golfer, but staying in your idol’s house for a week and having open access to him and his family was something I will never forget,” Webb said.

“This is my pay-it-forward for that experience I had with Greg Norman.”

“If there are 20-30 girls I can impact throughout the Series, that’s 30 people who can hopefully also pay it forward to the next generation.”