She might be almost 40, but the golfer five-time British Open champion Peter Thomson once rated the best in Australia is not ready to go quietly, just yet.

Karrie Webb is back into the top five in the Rolex Women’s World Golf Rankings – and if her previous form during our Australian summers is anything to go by – she’ll be there for a good while yet. 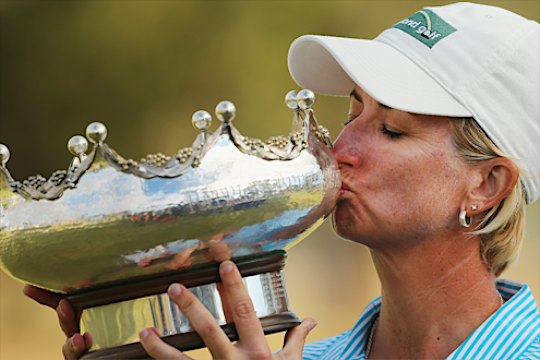 Webb moved up four places and into fifth spot after her recent second placing in the final major of the year for the women, The Evian Masters in France recently.

It is the highest Webb has been ranked since the middle of 2008.

Yet her form has been a revelation and her unlucky defeat at the Evian simple continued what has been a superb year for the popular Queenslander.

She has won twice on the LPGA Tour (the ISPS Handa Women’s Australian Open and the JTBC Founders Cup) and went within a stroke of adding an eighth major in France.

Indeed it took a two-shot swing on the final hole to deny Webb victory.

And like any champion would, Webb walked off the 18th green and found nothing but positives in her stellar play.

“I hit shots today that I don’t think I’ve ever been able to hit, so I’m really excited about that,” she said.

“Obviously it wasn’t meant to be.”

“I believe in fate a little bit, and I just wasn’t meant to win.”

Lorena Ochoa and Annika Sorenstam headed the women’s rankings in July, 2008 when Webb last featured in this elite group.

Other Australians Lindsey Wright, Rachel Hetherington and Katherine Hull also featured in the word’s top 100 at that time.