Other sports are moving with the times and golf has to do the same, according to our most successful woman player Karrie Webb.

Still regarded as one of the biggest attractions in the women’s game in the country, Webb was out of contention but still in demand at The Grange in Adelaide during last week’s Australian Women’s Open. 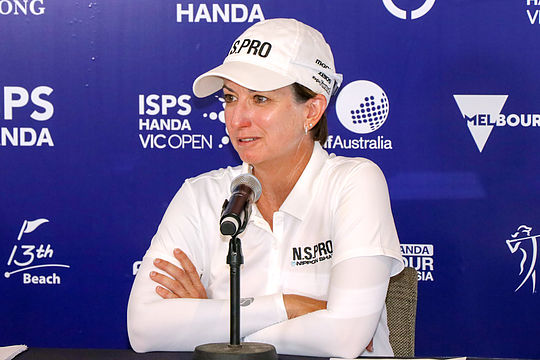 Webb took the opportunity to point out to the media contingent that the game had to make changes to avoid scaring off any young players thinking of taking up – or extending their stay in the game.

With sports like women’s cricket, Aussie Rules, soccer and even rugby making their mark in the women’s game, Webb says golf needs modernise its’ standards as well.

“It can be a very intimidating place for young boys and girls,” said Webb.

“They have got club rules – tuck your shirt in, take your hat off in the clubhouse, that sort of stuff.”

“I think we have to soften a little bit in golf to encourage kids to play: golf needs to get out of these traditions.”

“I grew up in north Queensland so I didn’t see a lot of that until I began travelling away and playing in the bigger cities.”

“One day [I] had to unpick the length of the hems so my shorts were long enough.”

“All those things need to go out the window and we need to modernise.”

And Webb says the time for those changes was now.

“There’s no time like the present for us to be concentrating on that because there are so many other sports in Australia that are,” she said.

“And if we don’t, we’ll be lost and the growth won’t continue at all.”

“It is definitely urgently needed.”

Of course no-one is in a better position or has more right to comment on the state of the game…Webb now has an incredible 41 wins on the LPGA Tour and says backing off from playing the tour full-time has re-ignited the veteran’s love of the game.