American Webb Simpson’s victory at the 2012 US Open is further evidence of how golf’s landscape is rapidly changing.

Between 1999 and 2008, Tiger Woods won 13 of the 36 majors. His amazing record in that decade was a reflection of his utter dominance of the game. 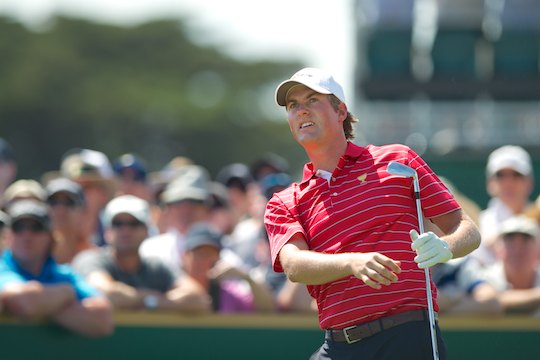 But Tiger’s decline over the past couple of years, due partly to leg injuries that kept him out of four majors since his last win at the 2008 US Open at Torrey Pines, has ushered in a period of parity in the sport.

What is often referred to as the ‘post-Tiger era’ has resulted in a different champion at 15 straight majors going back to Padraig Harrington at the 2008 US PGA Championship. Nine of them, like Simpson, have been first-timers.

And while Woods endured a lost weekend at the Olympic Club – starting the third round tied for the lead only to finish in a career-worst tie for 21st – he had to notice that his ever-younger rivals weren’t afraid to succeed.

“I think the game’s changing, (with) the Tiger effect of inspiring people to play at a younger age,” said the 26-year-old Simpson, who made his mark on the PGA Tour last year with two victories.

In only his second US Open and fifth major appearance, Simpson kept his cool under immense pressure to finish at one-over for the tournament, winning by a stroke from Northern Ireland’s Graeme McDowell and another twenty-something American, Michael Thompson.

Simpson was six behind the leaders with 13 holes to play, but four birdies within five holes put him well in contention.

That Simpson triumphed will inevitably be seen by some as further proof of the Olympic Club effect. That is, hold a US Open event at Olympic Club and the only guarantee is there will be a surprise winner.

It’s been that way since unheralded Jack Fleck out-duelled his idol, the legendary Ben Hogan, in a play-off to win the 1955 Open.

Arnold Palmer blew a seven-shot lead over Billy Casper with nine to play, Scott Simpson beat the legendary Tom Watson, and the last time the Open was held here, in 1998, Lee Janzen held off the people’s favourite, Payne Stewart.

This year’s US Open was filled with as much intrigue and uncertainty. Tiger looked threatening until Sunday, as did Furyk and McDowell. No one had Michael Thompson in the equation, whilst Simpson, having missed the last two cuts coming into the championship, wasn’t even on the radar.

Simpson, however, didn’t just appear out of thin air. Like many “unknown” major champions before him, Simpson has a golfing resume as long as your arm and the game to back it up.

The 26-year-old is a Wake Forest All-American, who went to school and played golf there on an Arnold Palmer scholarship. As an amateur he played in the victorious US 2007 Walker Cup and 2007 Palmer Cup teams and collected six main amateur championship titles, including the 2007 Dogwood Invitational, Southern Amateur and 2006 Sunnehanna Amateur.

After turning professional in June 2008, Simpson played on the PGA Tour and Nationwide Tour on sponsor’s exemptions. He recorded two runner-up finishes on the Nationwide Tour.

In 2011 Simpson turned in a career-best year with his first two PGA Tour wins at the Wyndham and Deutsche Bank championships and finished the season out with second place finishes in the FedEx Cup standings and money list – narrowly missing Player Of The Year honours.

In believing he could win a major, Simpson was inspired last year by Keegan Bradley’s play-off victory in the US PGA Championship last August, when Bradley became just the third man to win in his major debut.

“I think the prime of golf, the prime age ten to fifteen years ago was mid-30s,” Simpson said.

“Now it’s moving closer to the mid-20s or late 20s. There’s so many young guys. If I see Keegan Bradley win a major, I respect his game a ton, but I feel like, Keegan Bradley won one, so I want to go win one.”

“All these guys that won before me, I played with these guys all my life. They’re great players, but I want to do what they’re doing – we just kind of feed off of each other.”

Less than a year ago American golfers had not won any of the previous six majors. Now they have won the last three through Bradley, Watson and Simpson.

Simpson has joined them as the US Open champion, a win that moved him to number five in the world and in the process the new face of professional golf.