Webb works wonders for next gen of Aussie golfers

She has done it every year since 2008 but 2020 almost put a stop to a decade long tradition that has helped inspire so many young Aussie golfers.

Karrie Webb initially set up the Karrie Webb Series to give back to the game that has given her so much. 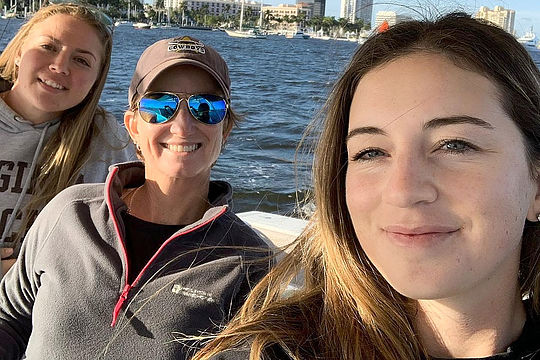 She still remembers being offered a similar experience when her idol, Greg Norman, flew her to the US to watch the World No.1 in action and stay at the family house for a week of mentorship.

Fast-forward to 2008 and one of the winningest LPGA Tour golfers of all time, welcomed the first two lucky recipients of her own award – Stephanie Na and Kristie Smith.

And so now in 2020, the Hall of Famer wasn’t going to let a worldwide pandemic get in the way of treating the girls to the highlight of their golfing lives.

Sydney’s Grace Kim won the title for the third time in a row while US-based Victorian Gabi Ruffels, who won the 2019 US Women’s Amateur, was named for the first time.

Unfortunately Kim was unable to make the trip and was replaced by Queenslander Emily Mahar as Australia’s next best player in the world amateur rankings.

“I was just so glad that we could make something happen,” Webb told Golf Australia’s Mark Hayes.

“I really didn’t want the girls to miss out – I know it’s not a major championship, but I feel they enjoyed their time at my home and got plenty out of the week.”

In past years, Webb has played host to the Series winners during the week of an LPGA Tour tournament but with COVID-19 decimating the US, it was decided that the 7-time major champ would have the girls at her home in Florida and they would utilise local courses for mentoring sessions instead.

“What an opportunity!” said Ruffels ahead of last week’s US Women’s Open where she finished in a share of 13th place.

“It’s a money-can’t-buy experience. I’m about to tee up in a major as an amateur and I get to ask a seven-time major champion anything I want. That’s unbelievably cool.”

“I was able to get so much priceless information about practice, especially short game – and we all know how much of a wizard Karrie is around the greens.”